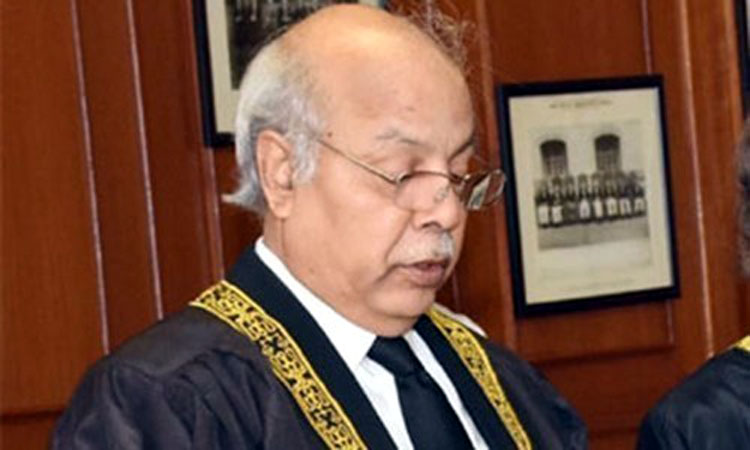 His father, Noor Muhammad, was a renowned lawyer in Karachi. Justice Gulzar Ahmed completed his elementary schooling from the city’s Gulistan School, according to the Supreme Court’s website.

He enrolled as an advocate on January 18, 1986, and joined the High Court on April 4, 1988. Subsequently, he became an advocate of the Supreme Court on September 15, 2001. Justice Gulzar Ahmed was elected honorary secretary of the Sindh High Court Bar Association in Karachi for the year 1999-2000.

Throughout his legal practice, he mostly dealt with civil-corporate law, serving as the legal advisor to numerous multinational and local companies, banks and financial institutions.

Justice Gulzar Ahmed, who was part of the five-judge bench that disqualified former premier Nawaz Sharif in the Panama Papers case, is also a member of the Supreme Judicial Council and the Judicial Commission of Pakistan. Justice Gulzar Ahmed came into the limelight for the first time when he penned a dissenting note in the Panama Papers case‘ s split verdict.

Apart from the Panama Papers case, Justice Gulzar Ahmed made headlines multiple times due to his strong verdicts and comments against governments and bureaucrats.

His strict action during suo motu proceedings regarding Karachi led to a massive anti-encroachment and cleanliness drive by the metropolitan authorities, though it also created some consternation among the people.

Earlier this month, Justice Ahmed while hearing a case pertaining to encroachments by Centaurus Mall directed the chairman of the Capital Development Authority (CDA) to launch a criminal investigation against officials suspected of being involved in misconduct. He also ordered the chairman to recover money from officials who caused financial losses to the body.

Last month, Justice Ahmed barred the federal government from selling the lands of Pakistan Steel Mills (PSM) with an observation that it belongs to the people.

Justice Ahmed lambasted the PPP-led provincial government of Sindh in June this year over poor governance while hearing a suo-motu case at the Supreme Court pertaining to the death of 10-year-old Amal Umer.

In another case, declaring Karachi the “worst city” in the country, a Justice Gulzar Ahmed-led bench expressed lack of trust in the provincial government. During the hearing, the provincial government’s prosecutor wanted to present his point of view on the “important matter” to which Justice Ahmed responded: “The Sindh government doesn’t even have a solution to any problem so you don’t speak”.

He added that the state of the Sindh government was “very bad”. “There is no government in the city of Karachi,” he had said.

In April this year, Justice Ahmed, while hearing a suo motu case concerning illegal constructions in Islamabad’s Banigala area, blasted CDA chairman Amir Ahmed Ali: “The point behind making Islamabad the federal capital is lost, mountains and forests have been eradicated, streams and rivers are full of trash, [and] have you seen the Rawal lake?” When the CDA chairman tried to clarify his position, Justice Gulzar said: “Please do not give us [excuses], if you do not want to work, please go somewhere else.”

“If you are not worthy of this position, why are you sitting here? Please go somewhere else, you already got your plot,” he continued. “Since I have come to Islamabad, I have seen that you have been unable to complete work on the Kashmir Highway; incomplete structures have been left as they are; and you never thought that criminals and drug addicts will take refuge here. This is your performance,” the judge railed.

“You just keep making and selling plots and creating slums. I am amazed: Is this even Islamabad?” he had remarked.

In January, Justice Ahmed had directed heads of the cantonment boards of Karachi to remove all commercial activities from their jurisdictions.