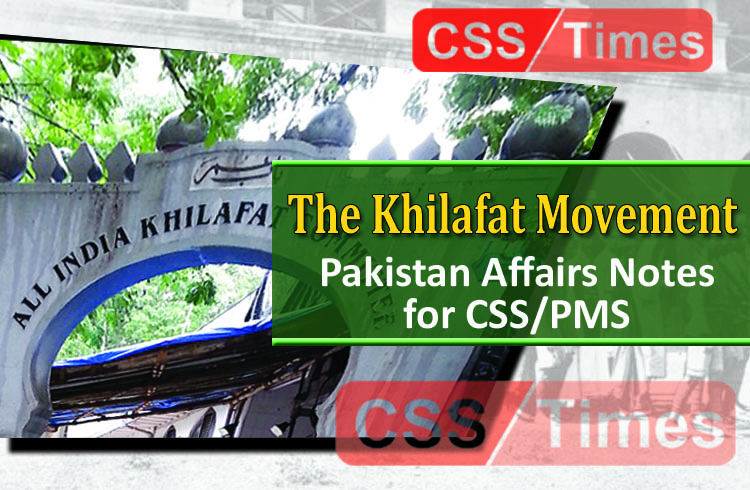 The Khilafat movement was a religio-political movement launched by the Muslims of British India for the retention of the Ottoman Caliphate and for not handing over the control of Muslim holy places to non-Muslims.

Turkey sided with Germany in World War 1. As it began to lose the war, concerns were expressed in India about the future of Turkey. It was a peak period from 1919 to 1922 casting demonstrations, boycott, and other pressure by the two major communities, the Hindus and the Muslims. Being brothers, the Indian Muslims realized their religious duty to help the Muslim country. It was the extra territorial attachments based on Islam. Another factor same to the first was that the Indian Muslims considered Ottoman Caliphate a symbol of unity of the Muslim world as Ummah.

1. Ottoman Khilafat should be kept intact.
2. Territorial solidarity of Turkey be preserved.
3. Control of holy the places should not be given to non-Muslims.

The writings of the Muslim intellectuals provoked the sentiments for the preservation of Khilafat and retention of the Muslims control of the holy places. The Muslims journalism played a vital role to steer the direction of the struggle. Zamindar of Zafar Ali Khan, Comrade and Hamdard of Maulana Muhammad Ali Jauhar, and Al-Hilal of Maulana Abul Kalam Azad etc. were the prominent newspapers and magazines which performed their duties to express their resentment. The Allies imposed humiliating terms on vanquished Turkey.

All India Khilafat Committee was formed at Bombay in July 1919. The first Khilafat Conference at Delhi in November 1919 was arranged in which the Congress leaders like Gandhi and Nehru participated. In this way, the major political parties joined hands to assault the injustice with the Muslim community. These steps were announced:

No participation in victory celebrations.
Boycott of British goods
Non Cooperation with the Government

The second Khilafat Conference (Amritsar) was held in Dec. 1919. Maulana Muhammad Ali and Shaukat Ali joined the session after being released from prison. In Jan. 1920, M. A. Ansari led a delegation to Viceroy while Maulana M. A. Jauhar to Europe. The Khilafat Committee decided to start non-cooperation in collaboration with the Congress in May 1920.

Rowlett Act was a black law introduced in India. To the law, the government got authority to persecute any Indian and the arrested had no facility of legal assistance and right to appeal just as the ‘Lettres de Cachet’ in France before the French Revolution. Jinnah resigned from the central legislature as a protest.

The people gathered in Jallianwala Bagh at Amritsar but General Dyer opened fire to disperse the throng that cast a huge human casualties (379). It is considered one of the great tragedies in India. In 1940, by killing Governor Punjab, Sir Michaal O’ Dayer, ‘Ram Muhammad Singh Azad’ got revenge of the Indian massacre.

The Nagpur Session of the Congress (Dec. 1920) approved non-cooperation with Government but Jinnah opposed and left the Congress because he was against the use of extra-constitutional means of protests.

In the session the participants expressed their loyalty to Turkish Sultan. They decided to continue the agitation and supported Attaturk to expel foreign forces from Turkey.

The Indian ulama (religious leaders) declared India ‘Darul Harab.’ Darul Harab means the place (country) where Muslims are not allowed to perform their religious practices. In the said situation, the Muslims should migrate to the nearest safe place. The ulama issued verdicts to go to Darul Islam, Afghanistan. There was an impression that King of Afghanistan would welcome them. So the migration took place at large scale. Initially Afghans welcomed them. Later, they closed the border and pushed the migrants back to the Indian territories. It resulted in loss of lives and money. Many died during this mission. Some went to Soviet Union from Afghanistan because they had nothing in India now.

End of the Movement

Moplahs were the descendents of the Arab Muslims settled in the Sub-Continent even before the arrival of Muhammad Bin Qasim. In August 1921, they revolted against Hindu landlords whose treatment was very brutal with them. Later this clash changed as Moplahs versus the Police and Hindu. This embittered the Hindu-Muslim relations.

There was an increase in violence day by day and the Chorachori Incident (UP) in February 1922 worsened the situation. The Congress volunteers set a police station on fire and 21 policemen were killed. Gandhi suddenly called off the movement.

In 1922 Attaturk emerged as a national leader and restricted powers of Sultan. Next he was appointed Chief of the state by Grand National Assembly. In March 1924, Khilafat was abolished. This caused a widespread resentment among the Indian Muslims. They sent delegations to Turkey but failed to achieve their objectives.

1. It was re-affirmation of the reality that religion is a mobilizing force and especially Islam has mobilization capacity to organize masses.
2. It was the movement launched on the basis of extra-territorialism. Later, no such movement but Pan-Islamic sentiments continued.
3. It resulted in the sufferings of the Muslims
4. Hindu-Muslim unity proved short-lived.

Reactivation of the Muslim League and other Muslim organizations to restart their activities as a separate nation was the great outcome.