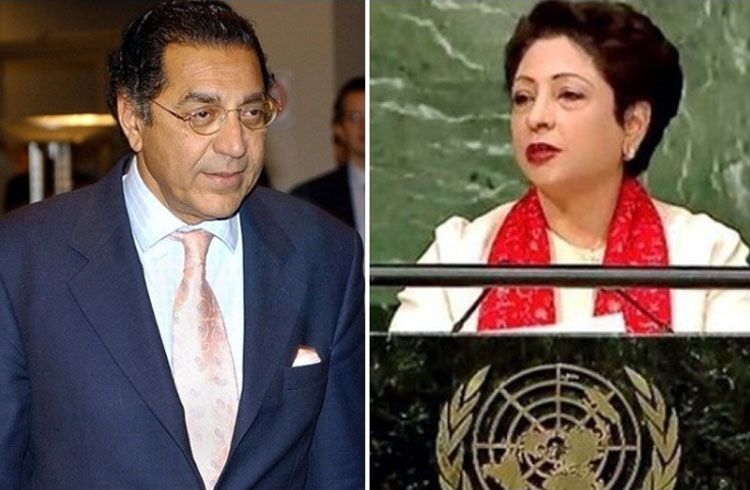 In a major reshuffle in the Ministry of Foreign Affairs, Prime Minister Imran Khan has approved the appointment of ambassador Munir Akram as Pakistan’s Permanent Representative to the United Nations in New York, the Foreign Office announced on September 30, 2019.

Akram will replace Dr Maleeha Lodhi, who has held the office of Pakistan’s envoy to the UN since February 2015.

Akram has served as Pakistan’s permanent representative to the UN previously as well, holding the office for six years between 2002 and 2008.

The sudden announcement comes a day after Prime Minister Imran and Foreign Minister Shah Mahmood Qureshi returned to Pakistan after wrapping up their visit to the United States to attend the 74th session of the UN General Assembly.

During his “Mission Kashmir” visit to New York, the prime minister addressed the 193-member UNGA, attended UN summit meetings, met a number of world leaders on the sidelines of the session including US President Donald Trump, addressed think-tanks and interacted with international media. Ambassador Lodhi accompanied the premier at a number of these engagements.

The government did not provide a reason for the replacement of Dr Lodhi. She has not been assigned any other portfolio as of now.

Following the announcement, Lodhi took to Twitter to say that she is grateful to have had the opportunity to represent the country for over four years.

“Representing Pakistan at the world’s most important multilateral forum was a great privilege,” she wrote, adding that she “had planned to move on after UNGA following a successful visit by the PM”. 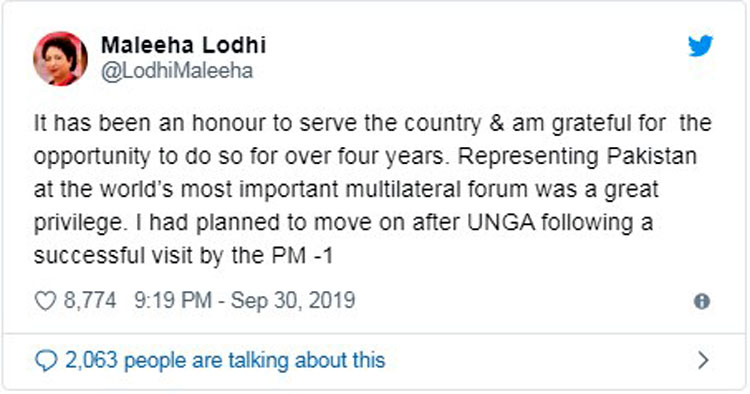 “I am humbled by the appreciation I have received for the PM’s visit and the support I have also received over the years. I wish my successor Munir Akram the best of luck!” she said in a subsequent tweet.

Who is Munir Akram?

Munir Akram, 74, specialises in multilateral diplomacy and holds a wide experience at the UN chapters in New York and Geneva, according to his profile on the Pakistan mission to the UN website.

Akram, who joined the Foreign Service of Pakistan in 1967, obtained a Master’s degree in political science and a Bachelors degree in law from the University of Karachi.

Besides holding various positions in the foreign ministry, he also served at the Pakistani missions in various world capitals, including Brussels and Tokyo, and as the Permanent Representative of Pakistan to the UN in Geneva.

In recognition of his outstanding contribution and par-excellence performance in the field of diplomacy and foreign policy, he was conferred the Hilal-i-Quaid-i-Azam award by the president of Pakistan.

He also regularly writes a column for daily Dawn.

Who is Maleeha Lodhi?

She also served as a member of the UN Secretary General’s Advisory Board on Disarmament Affairs (2001-2005).

She has taught at the London School of Economics and Political Science, has been a fellow at the Institute of Politics, Harvard University, as well as an international scholar at the Woodrow Wilson Centre, Washington, DC.

Dr Lodhi has also remained editor of leading English dailies in the country.

She was the recipient of the presidential award Hilal-e-Imtiaz for public service.

Among other changes approved by the prime minister, Khalil Ahmad Hashmi, who is at present serving as director general (UN) at the foreign ministry, has been appointed as the Permanent Representative of Pakistan to the UN in Geneva.

Muhammad Aejaz, the Additional Secretary (AIT) at MoFA, has been appointed as Pakistan’s ambassador to Hungary.

The Pakistani Charge d’ Affaires to Pyongyang, Syed Sajjad Haider, has now been posted as the new ambassador to Kuwait.

Imran Ahmad Siddiqui, who is presently serving as Pakistan’s consul general in Toronto, Canada, has been appointed as the high commissioner of Pakistan to Bangladesh. He will be replaced by Abdul Hamid.

Pakistan’s new envoy to Muscat, Oman will be Ahsan K.K. Wagan, who currently holds the office of Charge d’ Affaires in Niamey, Niger.

According to the FO statement, retired Maj Gen Muhammad Saad Khattak has been appointed as the High Commissioner of Pakistan to Sri Lanka.

Meanwhile, Abrar Hussain Hashmi has been appointed to serve as the Pakistani consul general in Houston, Texas, USA.