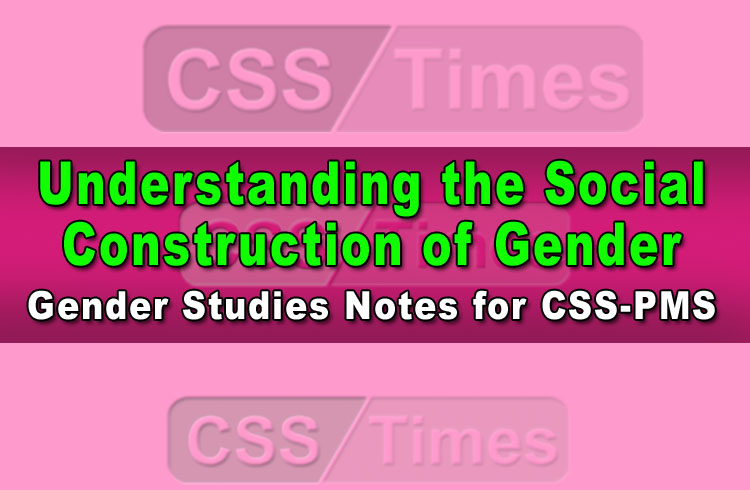 Social constructivists propose that there is no inherent truth to gender; it is constructed by social expectations and gender performance.

The social construction framework explains that there is no essential, universally distinct character that is masculine or feminine – behaviors are influenced by a range of factors including class, culture, ability, religion, age, body shape and sexual preference.

Construction of gender theory argues that girls and boys are actively involved in constructing their own gendered identities. Men and women can even take up a range of different masculinities and femininities that may at times contradict each other. This construction of gender identities (or subjectivities), varieties of femininities or masculinities, is also seen as dynamic, ongoing, changing and changeable, rather than static or fixed. assert that we “are not passively shaped by the larger societal forces such as schools or the media, but are active in selecting, adapting and rejecting the dimensions we choose to incorporate, or not, into our version of gender”.

This emphasis on the complexities and contradictions in the social relationships that shape our understandings of what it means to be male and female – both individually and collectively, and the notion of agency, or conscious choice, distinguish the model of the social construction of gender from essentialism or sex role theory..

Feminist and pro-feminist researchers have also emphasized how power is contextually and historically shaped and regulated and linked to the benefits and costs of “emphasized femininity” – based on “compliance … and accommodating the desires and interests of men”” and “hegemonic masculinity” characterized by power, authority, aggression, technical competence and heterosexuality. Poststructuralists emphasize the effects of language and discourse – how gender is spoken into existence; the intersections of race, class, disability and sexuality; the problem of masculinist structures and the need to disrupt and transform male / female binaries.

Unless we understand and challenge these binaries we will, according to Alloway (1995:12) perpetuate “gendered ways of being that give girls relative to boys lower paid and less socially prestigious levels of education and work, inequitable access to public sources of power, and disproportionate family responsibilities… (and) an order that privileges boys in terms of future earning capacity and establishment of positions of social power, at the same time exposing them to higher-risk drinking, self-destruction, violence towards others and criminality”.

There has been an overriding influence from distorting and trivializing media reportage on public perceptions about gender issues; with sensationalism and provocation gaining more attention from consumers than the more critically and empirically driven voices of academics.

The media informs or maintains the ignorance of many educators Researchers agree about the strong influence of an often explicit antifeminist backlash in the media and in popular literature about boys and education issues. The characteristics of this rhetoric include an essentialization of masculinity and a positioning of men and boys as the new victims or competing victims. Many of their arguments are unclear, confused and contradictory, and some are highly emotive…

Ludowyke points to how the critical analysis of feminists has publicly challenged the assumptions of dominant masculinity and affirms the necessity of acknowledging and respecting their insight. An actively feminist approach is required to address perceptions such that male workers in boys’ education and research are greater authorities than women. that we need more male role models and teachers; negative attitudes from boys to women who are working with boys; backlash assumptions such as the need for empowerment of boys; attitudes that boys have been neglected and are disadvantaged and the evident underutilization of resources which refer to the social construction of gender.

Essentialism or biological determinism is the belief that there is some essential biological difference in brain structures, learning styles, and interests, between males and females, that boys are possessed of particular masculine character traits such as aggressiveness and competitiveness, and are naturally more active and demanding – boys being boys.

Essentialism also refers to adrenalin and hormones and differing rates of maturity for boys and girls. It is proposed that these differences must be accommodated and catered for in program design and implementation.

Examples of strategies founded on this understanding include: wilderness camps; boys single sex classes; male role models and employment of more male teachers; investigation of the different learning styles of boys and girls; and surveys of male students’ needs and interests. Biological determinist theory is problematic because it cannot provide an adequate explanation for the wide range of differences in behaviors amongst females as a group, or for the wide range of behaviors amongst males as a group. These groups are not homogenous.

Identities, like social structures, are not natural and immutable, but are, in fact, dynamic and shifting constructions.

This is the theory that boys and girls experience a passive, sponge-like absorption of messages, from models of masculinity and femininity, which is mediated through social institutions such as the family and schools. Behaviors and identities are seen to be consistent and problems are described as a product of attitudes passively acquired through socialization…

This explanation has been found to be insufficient on a number of levels. A fundamental problem is the strong link between socialization theory and biological determinism theory.

Socialization theory actually reinforces ideas about difference based on biology. Discussions about equal opportunity or sex roles refer to assumed sex differences. Sex role theory is problematic in the same way that we don’t talk about essential and immutable race or class differences or race roles or class roles – because the exercise of power in these areas of social life is more obvious. Emerging understandings point to the risk of essentializing gender and the need to move beyond dualism.

The socialization explanation also fails to account for individual agency in choosing ideas and behaviors, or the influence of gendered power differentials in diverse environments. That is, it does not explain why gendered behaviors are not consistent – why some boys and girls do not exhibit the characteristics and behaviors ascribed to their sex, or how people are able to act differently according to their changing social contexts, that is, depending upon where they are and who they are with. This notion of choice or agency is a significant gap in the socialization explanation for behavior and is accounted for in the social construction of gender model.