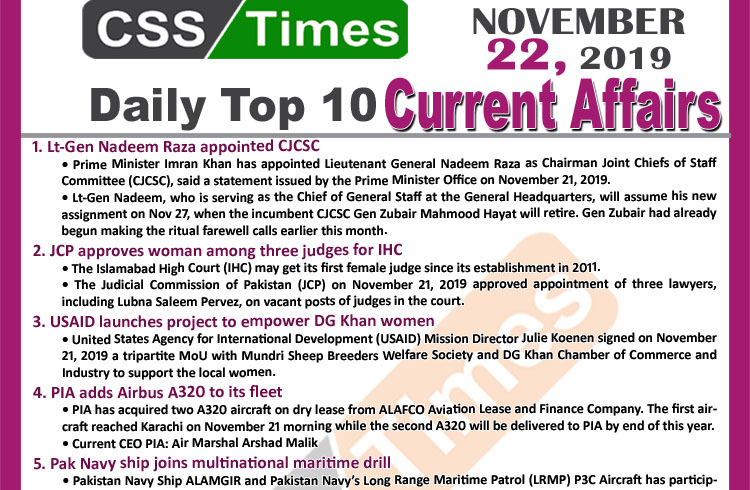 • Prime Minister Imran Khan has appointed Lieutenant General Nadeem Raza as Chairman Joint Chiefs of Staff Committee (CJCSC), said a statement issued by the Prime Minister Office on November 21, 2019.
• Lt-Gen Nadeem, who is serving as the Chief of General Staff at the General Headquarters, will assume his new assignment on Nov 27, when the incumbent CJCSC Gen Zubair Mahmood Hayat will retire. Gen Zubair had already begun making the ritual farewell calls earlier this month.
• The statement said that notification for reappointment of General Qamar Javed Bajwa as Chief of Army Staff for three years tenure has already been issued on August 19 this year. Gen Bajwa, who was set to retire on Nov 29 on completion of his three-year term, will now continue to serve as army chief until Nov 2022.
• Following his appointment as the CJCSC, Lt-Gen Nadeem Raza called on Prime Minister Imran at his office

• The Islamabad High Court (IHC) may get its first female judge since its establishment in 2011.
• The Judicial Commission of Pakistan (JCP) on November 21, 2019 approved appointment of three lawyers, including Lubna Saleem Pervez, on vacant posts of judges in the court.
• Advocate Lubna may become the first woman to serve as an IHC judge provided the Parliamentary Committee on Judges Appointment confirms the nominations by the JCP, which is headed by the chief justice of Pakistan, in a fortnight.
• Besides Ms Pervez, who was working as the deputy attorney general in the Sindh High Court (SHC), the other two lawyers are Fiaz Anjum Jandran and Ghulam Azam Qambrani.

• United States Agency for International Development (USAID) Mission Director Julie Koenen signed on November 21, 2019 a tripartite MoU with Mundri Sheep Breeders Welfare Society and DG Khan Chamber of Commerce and Industry to support the local women.
• It aims to formally launch the second phase of the Women Empowerment in South Punjab through Investment in Rural Economy (WEinSPIRE).
• WEinSPIRE is an initiative by the USAID’s Punjab Enabling Environment Project (PEEP) to support women livestock farmers that will be implemented over the next year. WEinSPIRE Bahawalpur trained 2,000 women in animal husbandry best practices, and provided loans through micro-finance institutions to over 35,000 women livestock farmers to start or expand their businesses.

• PIA has acquired two A320 aircraft on dry lease from ALAFCO Aviation Lease and Finance Company. The first aircraft reached Karachi on November 21, 2019 morning while the second A320 will be delivered to PIA by end of this year.
• Current CEO PIA: Air Marshal Arshad Malik

• Pakistan Navy Ship ALAMGIR and Pakistan Navy’s Long Range Maritime Patrol (LRMP) P3C Aircraft has participated in the multinational exercise DOGU AKDENIZ conducted in Mediterranean Sea.
• Naval assets and personnel from more than 12 countries participated in the exercise which continued for 13 days.
• The Multinational Maritime Exercise DOGU AKDENIZ provided Pakistan Navy an opportunity to enhance interoperability with the world navies, it said. During the exercise, Pakistan Navy ship ALAMGIR also visited port AKSAZ. At the port an onboard reception was held which was attended by senior officers of host navy, diplomats, dignitaries/ notables from host country and Pakistani community and officers/ personnel from ships participating in DOGU AKDENIZ exercise.

• The UN nuclear watchdog on November 21, 2019 urged Iran to explain the presence of uranium particles at an undeclared site, as a landmark deal aimed at curbing Tehran`s atomic activities threatens to collapse.
• The International Atomic Energy Agency (IAEA) said in a report that its inspectors had `detected natural uranium particles of anthropogenic origin at a location in Iran not declared to the agency`.
• The agency`s acting head Cornel Feruta said IAEA and Iranian officials would meet in Tehran next week to discuss the matter, adding that the UN body had not received any additional information.
• `The matter remains unresolved … It is essential that Iran worl(s with the agency to resolve this matter promptly,` he said at a meeting of the agency`s board ofgovernors

• A key UN committee has unanimously passed a Pakistan-sponsored resolution reaffirming the right to self-determination for peoples subjected to foreign and alien occupation.
• `Certainly, attempts to unilaterally change the status of the territory which have yet to exercise their right to self determination are illegal,` said Pakistan`s UN envoy Munir Akram while presenting the resolution. This was an obvious reference to India`s Aug 5 decision to annex occupied Kashmir.
• The 193-member Third Committee of the UN General Assembly, which deals with social, humanitarian and cultural issues, adopted the resolution without a vote. Now the resolution, which was co-sponsored by 81 countries, is expected to come up for the General Assembly`s endorsement next month.
• Pakistan has been tabling the resolution since 1981 and its adoption highlights issues like Kashmir and Palestine where people have been denied this inalienable right.

8. Kashmir not an internal matter of India

• Kashmir is not an internal matter of India, speakers gathered at an international conference in the Turkish capital agreed.
• “There is but one fair, just, legal and moral solution to Kashmir, which was provided by the United Nations acknowledging the right of the people of Kashmir to determine their own future through an impartial plebiscite under the UN auspices.”
• This was the message that came out loud and clear from a two-day international conference on Kashmir titled, “Kashmir Turmoil: Emerging Threats to Peace and the Role of International Community” organized by Lahore Center for Peace Research in collaboration with Turkish Think Tank “Institute of Strategic Thinking” (SDE) on November 20-21, 2019, in Ankara, Turkey

• Google will no longer allow political campaigns to target advertising at people based on their supposed political leanings.
• Campaigns will also be unable to match their own database of prospective voters against Google’s user base, to target individuals across platforms such as YouTube and Google search.
• The policy will begin in the UK “within a week”, with other regions later. Campaigns will still be able to target based on age, gender and location. Google added it would also take action on obviously misleading statements in ads, putting it at odds with Facebook. Mark Zuckerberg said his social network would not fact-check advertising from political candidates or campaigns. Twitter, meanwhile, said it would disallow political advertising altogether

• Israel’s attorney general has charged Prime Minister Benjamin Netanyahu with bribery, fraud and breach of trust in connection with three separate cases.
• Netanyahu is alleged to have accepted gifts from wealthy businessmen and dispensed favours to try to get more positive press coverage. He has denied any wrongdoing and said he is the victim of a “witch-hunt” by his left-wing opponents and the media.
• He has also insisted he will not resign and is not legally obliged to do so. But the announcement comes amid a political stand-off in Israel following two inconclusive general elections in April and September.