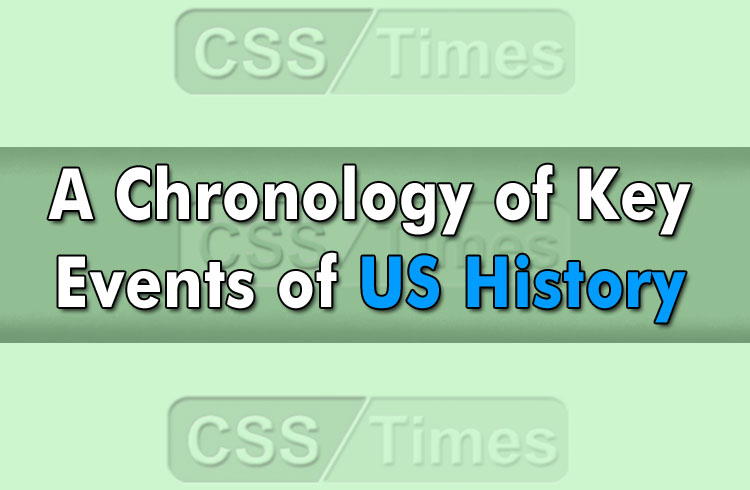 A Chronology of Key Events of US History

1781 – Rebel states form loose confederation, codified in Articles of Confederation, after defeating the British at the Battle of Yorktown.

1783 – Britain accepts loss of colonies by virtue of Treaty of Paris.

1787 – Founding Fathers draw up new constitution for United States of America. Constitution comes into effect in 1788.

1846-48 – US acquires vast tracts of Mexican territory in wake of Mexican War including California and New Mexico.

1854 – Opponents of slavery, or abolitionists, set up Republican Party.

World War I and the Great Depression

1917-18 – US intervenes in World War I, rejects membership of League of Nations.

1920 – Women given the right to vote under the Nineteenth Amendment.

1941 – Japanese warplanes attack US fleet at Pearl Harbour in Hawaii; US declares war on Japan; Germany declares war on US, which thereafter intervenes on a massive scale in World War II, eventually helping to defeat Germany.

1947 – US enunciates policy of aid for nations it deems threatened by communism in what became known as the Truman Doctrine. Cold War with Soviet Union begins.

1948 – America’s programme to revive ailing post-war European economies – the Marshall Plan – comes into force. Some $13bn is disbursed over four years and the plan is regarded as a success.

Desegregation and the Vietnam War

1961 – Bay of Pigs invasion: an unsuccessful attempt to invade Cuba by Cuban exiles, organised and financed by Washington.

1962 – US compels Soviet Union to withdraw nuclear weapons from Cuba in what has become known as the Cuban missile crisis.

US astronaut Neil Armstrong becomes the first person to walk on the Moon.

1979 – US embassy in Tehran, Iran, seized by radical students. The 444-day hostage crisis – including a failed rescue attempt in 1980 – impacts on Carter’s popularity and dominates the 1980 presidential election campaign.

1983 – US invades Caribbean nation of Grenada, partly prompted by its concerns over the island’s ties with Cuba.

2001 July – US tests its controversial missile defence shield, or “Son of Star Wars”.

2001 11 September – Co-ordinated suicide attacks on various high-profile targets, prompting the US to embark on a ”war on terror” which includes the invasion of Afghanistan and Iraq.

2001 October – US leads massive campaign of air strikes against Afghanistan and helps opposition forces defeat the Taleban regime and find Saudi-born dissident Osama Bin Laden, who is suspected of masterminding the 11 September attacks.

2003 February – Space shuttle Columbia’s 28th mission ends in tragedy when the craft breaks-up while re-entering the atmosphere. The seven astronauts on board are killed.

2016 November – Republican candidate Donald Trump wins presidential election, defeating Democratic candidate Hillary Clinton in one of the biggest political upsets in US history. He is inaugurated in January.

2017 January – President Trump signs executive orders restricting visas for people seeking to enter the US from certain Muslim-majority countries, and barring funding for cities that shelter illegal immigrants. Both policies are blocked by the courts.

President Trump warns of a military response after North Korea threatens to fire a missile towards the US Pacific territory of Guam.