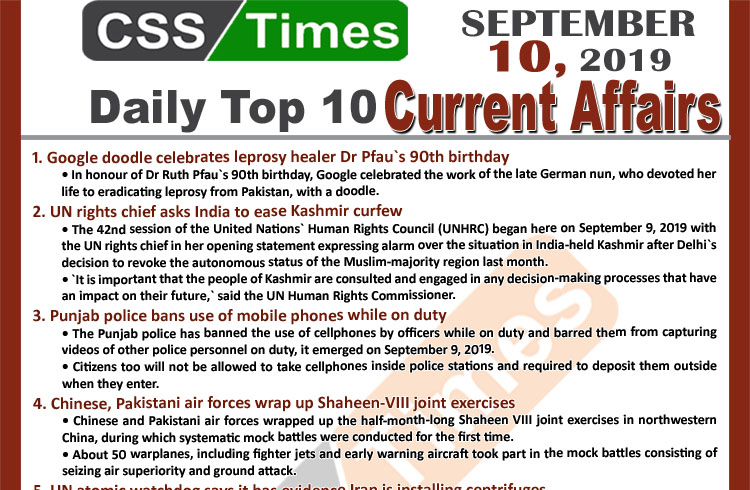 • In honour of Dr Ruth Pfau`s 90th birthday, Google celebrated the work of the late German nun, who devoted her life to eradicating leprosy from Pakistan, with a doodle.
• The doodle shows Dr Pfautending to a patient. Google also shared three other concepts shared by artist Alyssa Winans for the doodle. This included one of Dr Pfau`s outside the Marie Adelaide Lep-rosy Centre.
• In a blurb about the late nun, Google said that Dr Pfau was born in Leipzig in 1929 and `was inspired to become a nun at age 29 after meeting a concentration camp survivor. While travelling to India, she was waylaid in Pakistan by visa issues and paid a life-changing visit to the Marie Adelaide Leprosy Clinic in Karachi`.

• The 42nd session of the United Nations` Human Rights Council (UNHRC) began here on September 9, 2019 with the UN rights chief in her opening statement expressing alarm over the situation in India-held Kashmir after Delhi`s decision to revoke the autonomous status of the Muslim-majority region last month.
• `I am deeply concerned about the impact of recent actions by the government of India on the human right s of Kashmiris,` Michelle Bachelet said, pointing to the `restrictions on internet communications and peaceful assembly, and the detention of local political leaders and activists` Ms Bachelet in her address to the UN Human Rights Council said she had urged both India and Pakistan to ensure that rights in the region are respected and protected, but she had `appealed particularly to India to ease the current lockdowns or curfews, to ensure people`s access to basic services, and that all due process, rights are respected for those who have been detained.
• `It is important that the people of Kashmir are consulted and engaged in any decision-making processes that have an impact on their future,` said the UN Human Rights Commissioner.

3. Punjab police bans use of mobile phones while on duty

• The Punjab police has banned the use of cellphones by officers while on duty and barred them from capturing videos of other police personnel on duty, it emerged on September 9, 2019.
• Following the increase in video clips displaying Punjab Police’s brutality and misconduct, Inspector General of Police Arif Nawaz has forbidden officers below the rank of SHO from using video recording enabled smart phones inside police stations.
• Citizens too will not be allowed to take cellphones inside police stations and required to deposit them outside when they enter.
• A communiqué sent to all Punjab police officers by the additional inspector general on behalf of the Punjab IG stated that it had been observed that police officials were using mobile phones while on duty even though “clear directions in this regard have already been conveyed to all field formations”.

• Chinese and Pakistani air forces wrapped up the half-month-long Shaheen VIII joint exercises in northwestern China, during which systematic mock battles were conducted for the first time.
• Multiple types of warplanes, surface-to-air missiles and radar installations from the two air forces took part in the mock battles, according to a statement issued by the Chinese People’s Liberation Army (PLA) Air Force.
• The red team was from China’s air force, and the blue team was a combination of Chinese and Pakistani troops.
• About 50 warplanes, including fighter jets and early warning aircraft took part in the mock battles consisting of seizing air superiority and ground attack.

• The United Nations` atomic watchdog confirmed on September 9, 2019 that Iran is preparing to use more advanced centrifuges, another breach of limits set in the country`s slowly unravelling nuclear deal with major powers.
• Iran had already announced the step, its latest violation of the 2015 agreement as it tries to pressure European signatories to find a way to maintain oil shipments and ease the toll of US sanctions on the Iranian economy.
• The International Atomic Energy Agency reported its inspectors verified the installation of new centrifuges. The agency said all had been `prepared for testing` but none yet tested at the time of the Sept. 7-8 inspection.

• Russia’s ruling United Russia party, which supports President Vladimir Putin, has lost one third of its seats in the Moscow city assembly, final polling data cited by Russian news agencies showed on September 9, 2019, in an awkward setback for the Kremlin.
• However, the party retained its majority in the Moscow assembly following Sunday’s nationwide local elections, and its candidates for regional governor appeared to have won in St Petersburg and in 15 other parts of the vast country.
• The outcome of the local elections was closely watched in Moscow after the exclusion of many opposition candidates triggered the biggest protests there in nearly a decade.
• Public anger over more than five years of falling incomes and an unpopular hike in the pension age also helped fuel the Moscow protests, with the Communist Party benefiting most in Sunday’s polls from the discontent.

• Directed by SaimSadiq, the Pakistani short film “Darling” has won the award for Best Short Film at the Venice Film Festival .The film features upcoming actress Mehar Bano, Abdullah Malik, and Nadia Afgan.
• Alina Khan, a transgender actress from Lahore, plays a transgender character in the story. This film marks her acting debut.
• “Darling” tackles the lack of transgender representation in the country’s visual arts, and is bound to engage with emotions and relationships that have previously not been the subject of films in Pakistan. The film is also the first ever Pakistani film to have been screened in competition at the Venice Film Festival .
• The short has previously been screened at the Toronto International Film Festival, and the director Sadiq’s previous short film, “Nice Talking To You”, has also been screened at multiple film festivals in the United States.

• Captain Rashid Khan claimed 6-49 and completed his maiden 10-wicket haul as Afghanistan defied rain and fading light to beat Bangladesh by a massive 224run margin in the one-off Test in Chittagong on September 9, 2019.
• Rashid grabbed three of the remaining four wickets as Afghanistan took 17.2 overs on the fifth day to bowl out Bangladeshfor173inthe second innings after the hosts resumed with 136-6.Play started on the fifth day at 1:00pm local time after rain wiped out the first session at the Zahur Ahmed Chowdhury Stadium.
• It returned in abundance after the visitors bowled just 2.1 overs without being able to inflict any damage on the home side.

• Rafa Nadal survived a heroic Daniil Medvedev fight back to claim an epic 7-5 6-3 5-7 4-6 6-4 win and a fourth US Open title on Sunday, moving within one Grand Slam crown of matching Roger Federer’s record of 20.
• A routine end to the Flushing Meadows fortnight looked on the cards when Nadal, already two sets up, broke for a 3-2 lead over the tall Russian in the third with the 19th Grand Slam title apparently in the bag. From that point, however, the match was transformed into a near five-hour thriller as Medvedev staged a comeback that left the Spaniard shaken and Arthur Ashe Stadium buzzing.

• Elise Mertens and Aryna Sabalenka won their first career Grand Slam title with a hard-fought 7-5 7-5 win over Ash Barty and Victoria Azarenka in the US Open doubles final on September 8, 2019.
• The tension-filled encounter ended in dramatic fashion when both Mertens and Sabalenka were drawn into the net and Barty sent a lob over both their heads. Sabalenka raced back to track it down and managed to put it back in play but Azarenka misfired with her overhead smash. Mertens fell to the court and Sabalenka looked to the sky in disbelief before they embraced.
• Azarenka and Barty outplayed their opponents for much of the match but were only able to convert two of their eight break point opportunities while Mertens and Sabalenka won all four of their break point opportunities. 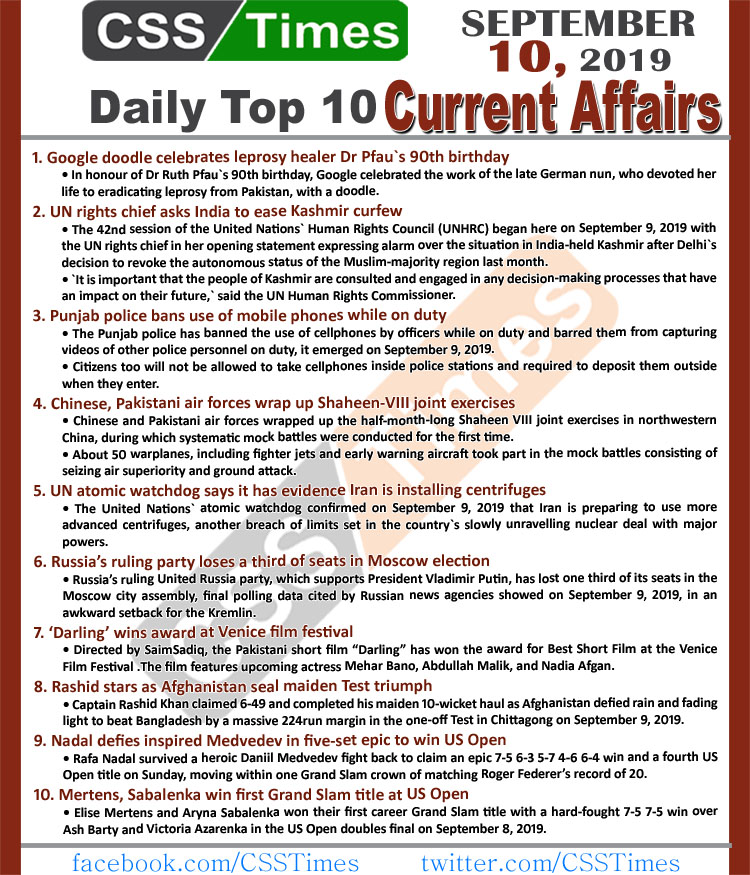