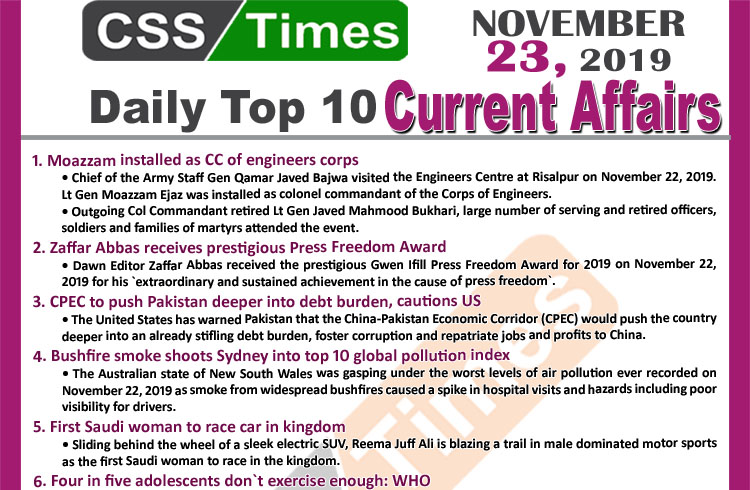 • Dawn Editor Zaffar Abbas received the prestigious Gwen Ifill Press Freedom Award for 2019 on November 22, 2019 for his `extraordinary and sustained achievement in the cause of press freedom`.
• The award is named after Ms Ifill, the first woman of African descent to host anationally televised news show in the United States.
• American journalist Lester Holt, an internationally recognised NBC news anchor, presented the award to Mr Abbas at a ceremony in New York. `There could be a no more deserving recipient than Zaffar Abbas,` Mr Holt said. The Committee to Protect Journalists (CPJ) announced Mr Abbas as the recipient of the award in July.

3. CPEC to push Pakistan deeper into debt burden, cautions US

• The United States has warned Pakistan that the China-Pakistan Economic Corridor (CPEC) would push the country deeper into an already stifling debt burden, foster corruption and repatriate jobs and profits to China.
• In a speech, described as `unusually specific` by the international media, the top US diplomat for South Asia warned that the multi-billion-dollar project would take a toll on Pakistan`s economy at the time of repayments and dividend in the coming years.
• Assistant Secretary Alice Wells explained that CPEC was not an aid to Pakistan but a form of financing that guarantees profits for Chinese state-owned enterprises, with little benefits for Islamabad.
• As an international media report pointed out, this specific warning comes at a time when Washington and Islamabad are trying to rebuild their turbulent relationship

• The Australian state of New South Wales was gasping under the worst levels of air pollution ever recorded on November 22, 2019 as smoke from widespread bushfires caused a spike in hospital visits and hazards including poor visibility for drivers.
• Sydney, the country`s most populous city, was blanketed in a thick haze for the fourth consecutive day, pushing it into a rare and repeat appearance in the list of top ten cities with the worst air pollution in the world.
• `The streets are deserted as people try and avoid being outside as much as possible,` Barry Hollman, mayor of the town of Bourke, some 800 km (497.1 miles) northwest of Sydney, said.

• Sliding behind the wheel of a sleek electric SUV, Reema Juff Ali is blazing a trail in male dominated motor sports as the first Saudi woman to race in the kingdom.
• Such adrenalin rushes were unimaginable for women in the ultra-conservative kingdom until June last year, when it overturned the world`s only ban on female motorists as part of Crown Prince Mohammed bin Salman`s wide-ranging liberalisation drive.
• Juffali, a 27-year-old who made her motoring debut just months after the decades-old ban ended, is competing in the Jaguar I-PACE e TROPHY, an all-electric race in Diriyah, close to the capital Riyadh.

• Four in five adolescents worldwide do not get enough physical activity, to the detriment of their health, the World Health Organisation said on Friday, warning that girls especially need more exercise.
• In its first-ever report on global trends for adolescent physical activity, the UN health agency stressed that urgent action was needed to get teens of f their screens and moving more.
• `We absolutely need to do more or we will be looking at a very bleak health picture forthese adolescents,` study co-author Leanne Riley told journalists ahead of the launch

• The African Union ordered Britain on Friday to withdraw from the Chagos Islands and end its “continued colonial administration” after a United Nations deadline for it to do so expired.
• The Chagos Islands belong to the Indian Ocean island nation of Mauritius, according to the advisory opinion the top U.N. court issued in February.
• The U.N. General Assembly in May voted in favour of Britain returning the islands to Mauritius and set a deadline for Nov. 22.

• The European Space Agency (Esa) will show its commitment to the new wave of lunar exploration when member-state research ministers meet in Seville, Spain, next week.
• The politicians are expected to commit hundreds of millions of euros to fund technologies that will support the US-led Artemis project to return humans to the Moon.
• Included will be the money to complete two propulsion-cum-service modules that are needed to push the Americans’ Orion crew capsules through space. These spacecraft, which will take part in the Nasa missions known as Artemis 3 and 4, are scheduled to fly from 2024 onwards. They will witness the first astronaut sorties to the lunar surface in nearly 50 years.

• Tesla has unveiled its “Cybertruck” pickup truck, but not without an embarrassing moment on stage.
• The truck’s windows were smashed during a demonstration supposed to show how hard they were to break. Mr Musk was heard to swear before joking: “Room for improvement.”

• Subhan Ahmad has stepped down as the Pakistan Cricket Board’s Chief Operating Officer (COO) after nine years in the role, the Board of Governors were informed during their 56th meeting on Saturday. 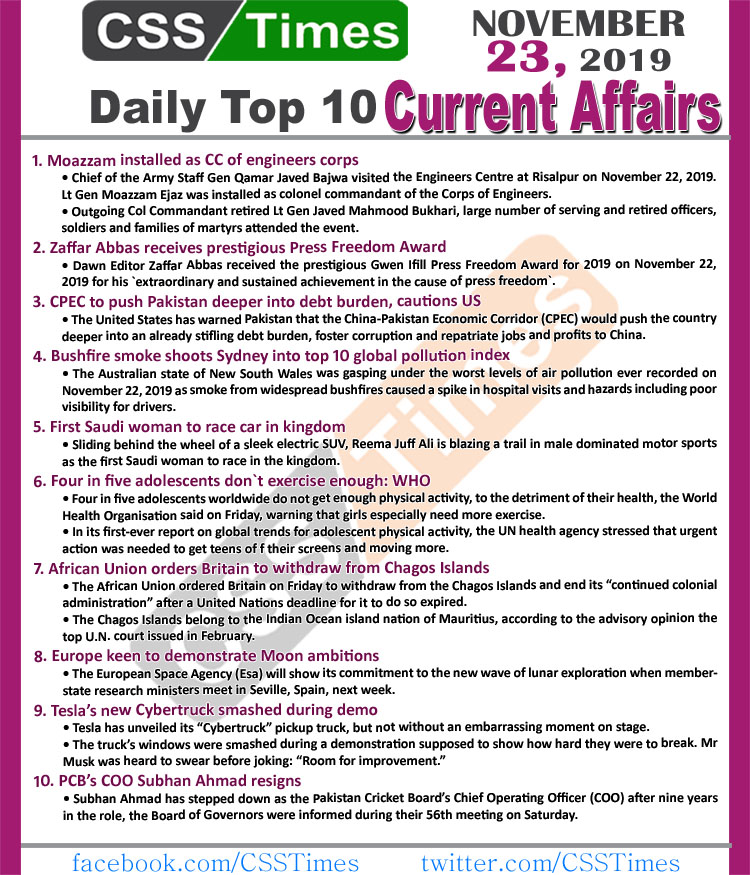