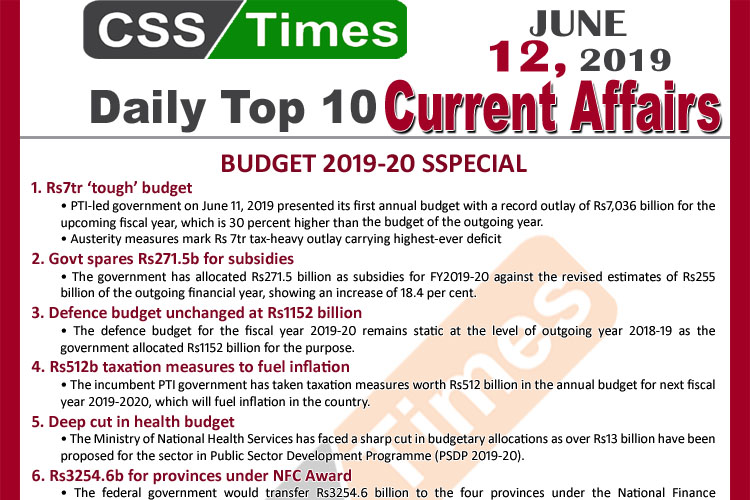 • The defence budget for the fiscal year 2019-20 remains static at the level of outgoing year 2018-19 as the government allocated Rs1152 billion for the purpose.
• Minister of State for Revenue Hammad Azhar has, however, assured that there will be no compromise on the efficiency of the armed forces as he presented the budget in the National Assembly on Tuesday. The decision to freeze the defence budget for one year has been taken due to the country’s dire economic condition.

• The incumbent PTI government has taken taxation measures worth Rs512 billion in the annual budget for next fiscal year 2019-2020, which will fuel inflation in the country.
• The government has set challenging tax collection target for the Federal Board of Revenue (FBR) at Rs5.55 trillion for the next fiscal year as against expected collection of Rs4 trillion in outgoing year. In order to achieve the mammoth tax collection target, the government has introduced tax measures of Rs512 billion. The FBR has taken additional measures worth Rs200 billion income tax, Rs200 billion in general sales tax and remaining Rs112 billion in federal excise duty and customs duty. The massive taxation will increase the inflation

• The Ministry of National Health Services has faced a sharp cut in budgetary allocations as over Rs13 billion have been proposed for the sector in Public Sector Development Programme (PSDP 2019-20).
• The budget for the health sector at national level has been almost slashed half as over Rs25 billion were allocated in the previous fiscal year of 2018-19. Later, on the allocation of Rs25 billion was also revised and Rs8.133 billion was allocated in fiscal year 2018-19.
• However, this year the total allocation proposed for the ministry of NHS programme for the next fiscal year is Rs13.376558.

• The federal government would transfer Rs3254.6 billion to the four provinces under the National Finance Commission (NFC) Award in the budget for the fiscal year 2019-2020
• The government has prepared the budget on the basis of the 7th NFC Award as the government has failed to constitute a new revenue sharing formula between the centre and the four provinces. The government would extend the 7th NFC Award for another year.
• The provincial governments get shares from the federal government under NFC award as per the said formula. Punjab gets 51.74 percent, Sindh 24.55 percent, Khyber-Pakhtunkhwa 14.62 percent and Balochistan 9.09 percent.

• The government has earmarked Rs1.34 billion under Public Sector Development Programme (PSDP) for completing various projects of Law and Justice Division during financial year 2019-20.
• According to latest data of PSDP 2019-20 released by the Planning Commission, Ministry of Planning, Development and Reforms Rs400 million has been allocated for the construction of Sessions Complex (East and West) in Mauve Area, Sector G-10/1, Islamabad. While the estimated cost of the project is Rs3,000 million.
• From out of a total of Rs6,119 million estimated cost of 10 ongoing schemes, the federal government has allocated Rs940.225 million during Rs2019-20 for the ongoing projects. The government has allocated Rs34.179 million for the ongoing automation of federal courts located at federal courts complex in Islamabad for PSDP of 2019-20. Rs11 million has been earmarked for ongoing construction of additional block in Judicial and Administration Complex at Mauve Area, G -10/1, Islamabad.

• The federal government has earmarked total Rs140 billion for the internal security and law and order related expenditures under the head of Ministry of Interior in the finance bill 2019-20 and the allocation is 28 per cent higher than the outgoing fiscal year.
• The Rs140 billion allocations include allocation for Interior Division, Islamabad administration as well as police, Passport Office, civil armed forces, Frontier Constabulary, Pakistan Coastal Guards, Pakistan Rangers and miscellaneous expenditures of the interior division.
• In the outgoing fiscal year 2018-19, the government had allocated Rs109 billion for running expenditures of all those departments that fall under the Ministry of Interior.

• The government has allocated Rs 1000 million for the land acquisition and development of infrastructure in Kartarpur corridor in the Public Sector Development Program (PSDP) 2019-20.
• Last year, the government announced the opening of four-kilometre-long visa-free corridor on Kartarpura, Narowal, Punjab, to provide easy access to Sikh pilgrims from India, In the first phase, scheduled to be completed till November 2019, a boarding terminal has been planned near the border. Pilgrims will be transported to the gurdwara, through an 800-metre-long bridge, which has to be built across the River Ravi. Accommodation facility of up to 10,000 pilgrims will also be built in the first phase. 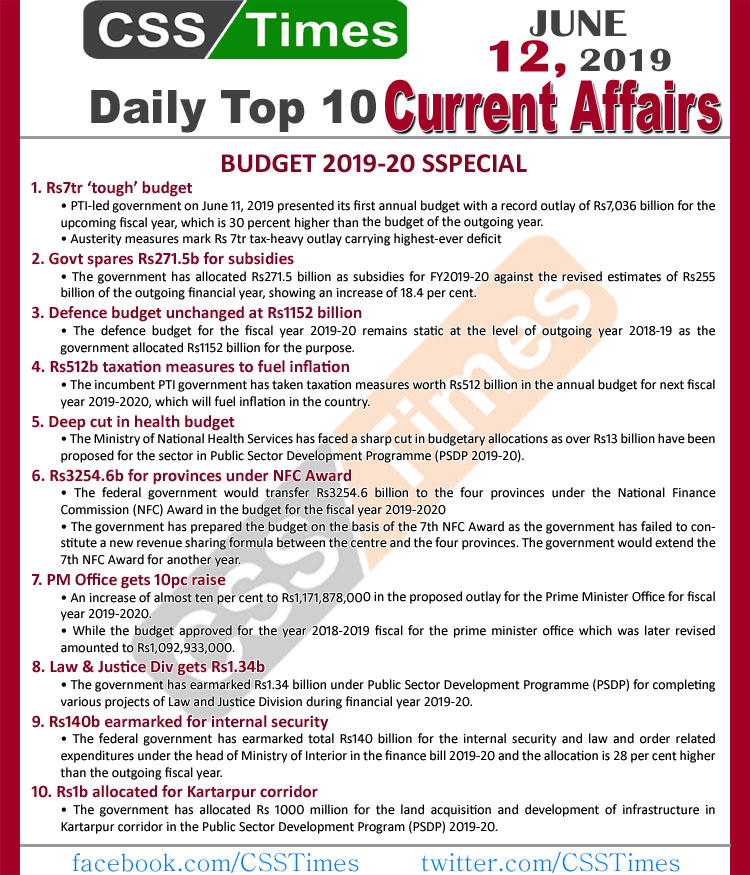