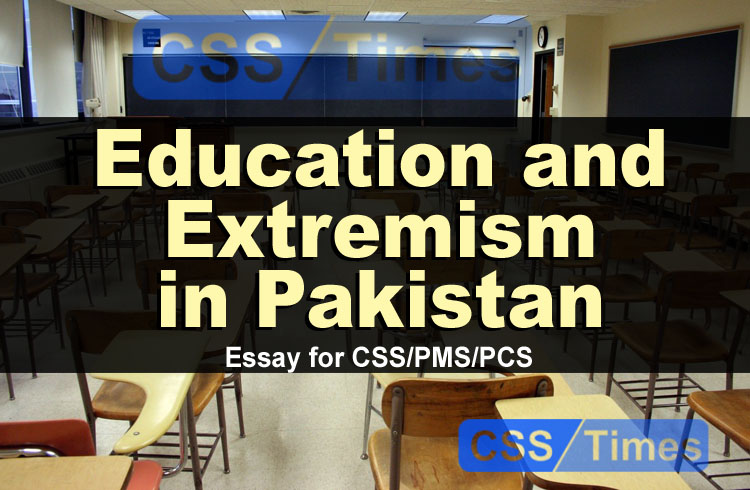 Extremism in the name of Islam has greatly affected the structural stability and functionality of Pakistani society and the state in recent years. Extremism could be effectively prevented and countered through viable educational infrastructure in the country. The case of Pakistan in this context is unique. In our country, educational institutions and academia have become a key factor in extremism and terrorism. Although regarding the connection between education and extremism in Pakistan much attention has remained focused on the role of madrassas, the main issue is the failure of successive governments and regimes to provide adequate education infrastructure and curricula.

On the contrary, social scientists and educationists are concerned about the curriculum taught in public schools and think it is fixated on religion and ideology and that it needs to be reformed. Many studies on the syllabi in Pakistan corroborate their view.

At the same time, a segment of Pakistan’s secular elite opposes campaigns for the equal right to education for all citizens. They have a set of reservations which reflects a pessimist mindset. Their major objection is also related to the curriculum. They argue that it is producing generations that will push the country further into extremism. They also argue that the economy cannot afford the burden of more literates and the market has already absorbed more than its capacity.

Interestingly, both the madressah establishment and secular segments of society oppose the formal education system for divergent ideological reasons. Though these anti-public education segments do not represent the majority of their class, they do contribute to the state’s attitudes towards education. Despite the Constitution’s Article 25A, which ensures an equal and compulsory right to education for every citizen, the federal and provincial governments are not prioritising education in their development discourse.

The formal education sector in Pakistan is believed to be catering to the needs of 75pc of the population, while less than 4pc of students go to religious seminaries. Elite schools enroll an even lesser percentage. Both the public and private services sectors heavily depend on the formal education sector. The increasing number of technical training institutions in the public and private sectors not only fulfils the internal demand for skilled labour but also for labour abroad. Increases in foreign remittances are linked to skilled Pakistani labour abroad.

The pessimist mindset is not ready to realise that education is a social instrument for developing human resources and for human capital formation. Pessimist elites in India and Bangladesh had similar fears until a few decades ago. But both countries gradually saw that literacy leads to education and results in empowerment, which enables one to contribute to community development.

As far as the question of extremism is concerned, it has its own dynamics which are linked largely to state policies as well as to the ideological and political ambiguities created by the establishment and its beneficiaries. Foreign and local scholars have done extensive research on the subject and are still exploring the changing dynamics of extremism and thinking patterns but nobody has proved education to be the sole factor in extremism. If this was indeed the case, then all social classes and educational institutions would not be facing extremism of equal levels within their respective spheres.

Interestingly, radical and militant groups also follow class distinctions and are quite aware of their constituencies and areas of support among different classes in Pakistan. For instance, sectarian and local Taliban factions function mainly in the lower middle classes and consider these an important support base.

Urban-based militants including Lashkar-e-Taiba and factions of the Punjabi Taliban (affiliates of Al Qaeda) depend on the middle class and have encroached into formal and private educational institutes. Radical groups such as Hizbut Tahrir and Al Huda are active in indoctrinating elite classes and have established their networks in their institutions. Al Qaeda is also a beneficiary of radical tendencies found among the elite as it is continuously producing terrorists like Omer Saeed Sheikh, Khalid Sheikh and Faisal Shazad.

Extremism is a complex phenomenon and cannot be understood in general terms. There is a need to evolve a consensus approach at both the state and society level to tackle it. Linking education to ideological, social and economic challenges is not the right approach. Such an approach cannot provide any solution and is nothing but an attempt to draw a curtain over the wrongdoings of the state and influential classes in the field of education. Blaming the education system alone will not help resolve the problem.

No doubt, the current education systems including the formal, the elitist and the religious education institutions need massive reforms, but on the baseless fears of extremism, a small job market and economic burden, the nation cannot be kept illiterate and ignorant.

There is a dire need to combine all energies to promote and reform the education sector. Instead of blaming the education system for the common man, there is a need to focus more on literacy and educational reforms.

However, the problems with madrassas are multifaceted and not just limited to militancy. The students of thousands of madrassas are imparted religious theory, largely based on selective lessons from the Islamic scripture and their de-contextualised exegesis, and are prepared to take up jobs in the religious sector. The main problem of madrassas is that their extremely narrow worldview that they cultivate among their students along with the curricula that is bereft of modern civic education interacts with the poverty of the students and cause large-scale radicalisation of society.

Importantly, well before madrassas in Pakistan became hubs of militant training and extremism, many universities and colleges had already been dens of arms, ammunition and violence, if not of militant training per se. The example of the Punjab University is a case in point where a student group, the Islami Jamiat-e-Talaba, associated with Jamaat-e-Islami, since long has made the institute into its virtual forte and preaching of its radical agenda. According to an American expert on Pakistan, Christine Fair, who was informed by some Pakistani official respondents, as much as 40 per cent of militant manpower actually comes from Pakistan’s public schools and higher educational institutions. 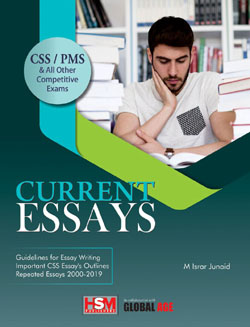 CSS Current Essays
Book Price: 495
Whatsapp your order at 03224661117 to get book at your doorstep with cash on delivery