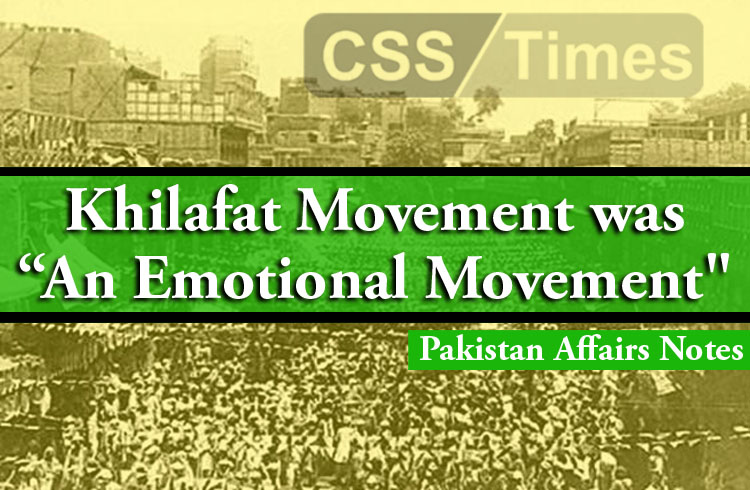 Khilafat Movement was “An Emotional Movement”

There is an assumption that the Muslims can only be mobilized politically if religion, and religious symbols are used. If it is true, it means that politics requires religion to survive and to play an active role in the Muslim society. In the word of poet Iqbal if religion is separated from politics, it becomes a tyranny.

However, there are two aspects of the use of religion. In the case of despotic and authoritarian systems, where power is concentrated in the hands of an individual, such as a monarchy or dictatorship, the religious scholars (ulama) are used by them to support their political ends. There are plenty examples in history as to how the kings and rulers asked the ulama to issue fatwas (religious injunctions) in their favour or in support of their policies.

The Khilafat movement could be analysed and judged under the circumstances when the colonial government allowed political parties to play their role in the framework that was granted by the government. The ulama, who were confined to their religious seminaries, got an opportunity to come out from their isolation and took full part in politics. That was the first time that they became active in any mass movement. Exploiting the situation they plunged in it with full religious fervour and vigour.

Interestingly, the British promoted the image of the Ottoman Caliph in India for their own political motives. In 1857, during the Great Rebellion, they got a fatwa from the caliph exhorting the Muslim not to fight against the British.

Because of their enmity to Russia at the time, Britain took up a pro-Ottoman line and promoted among the Indian Muslims loyalty to the Ottoman Caliph who, in his turn took advantage of the position by spreading his propaganda and exploiting the false notion of the Caliphate put out by the Europeans.

Chaudhary Khaliquzzaman, a Muslim leader from Oudh, realized the danger of Islamisation of politics and warned that: “they would either be wept off their legs or would carry the whole of Muslim India with them.” This is exactly what happened. The khilafat issue became the core issue of the Muslim politics and all other problems were completely forgotten.

Once Khilafat became the symbol and religion was involved in it, the modern and liberal leadership was marginalized and the ulama as the custodians of religion came forward to lead the Muslim Community of India. Ali brothers, who started their political career as moderates, were converted with the process and became maulana having beards and wearing the dress particular for the religious leaders.

The important aspect of this period is that whole political process was taken over by the All India khilafat Committee that was set up in 1919 and made Muslim league a non-entity.

With the entry of the ulama, the whole character of the movement changed. The element of emotionalism was fully inculcated to mobilize the Muslim masses in the name of religion. Fiery speeches with charged sentiments became daily occurances. The study of the newspapers of this period clearly shows the emotionalism. For example, Maulana Abdul Bari from Faringi Mahal was in the habit to warn his rivals and threatened to eliminate them. In one of the Muslim League sessions at Delhi he said that he could shake the world with one word of his mouth and one stroke of his pen.

In the Amritsar session of the Muslim League that was attended by the Ali brothers, emotional speeches were delivered. Shaukat Ali declared that he would sacrifice his property and life to protect Kaaba. He finished by asking the audience whether they wished to remain British subjects or Muslims, and if it was the former, he would sever his connection with them and seek martyrdom.

The question is why Gandhi supported the Khilafat movement, which was dealing with an Islamic issue and had nothing to do with the Indian problems? As Gail Minault points out Muhammad Ali was much impressed by Gandhi’s approach to politics when addressing to students at Calcutta he said that “politics cannot be divorced from religion”. Gandhi was approached by Maulana Bari to support the Khilafat movement. That was the time when Gandhi was planning to launch a campaign against the Rowlatt Bill and against the Punjab atrocities. It appears that it was easy for Gandhi to deal with the Ali brothers and Ulama rather than Jinnah who was not in favour of the Khilafat issue. His cool approach to politics was a contrast to the emotionally charged movement led by the ulama.

The Congress and the Khilafat movement supported the non-cooperation, and as result a unanimous fatwa was issued by the ulama in 1920 that appealed the Muslims to boycott the government on religious grounds. The opening paragraph says:

During the whole movement Gandhi became the supreme leader and highly praised by the Ali brothers and the ulama. However, the non-cooperation movement collapsed after Chaura Cahuri’s incident in 1922 and the Khilafat issue became redundant when Mustafa Kamal abolished the institution in 1924.

The khilafat movement islamised the politics for the Indian Muslims. Instead of creating political understanding and analysing political issue purely on political grounds, they supported or rejected all these issues on the basis of religion. Once religion became supreme authority to understand and act politically, the ulama gained ground and assumed leadership. This is evident during the khilafat movement when attempts were made to establish separate shriat court and collect zakat. As a result of the movement religious and non- political consciousness was created among the Muslims. While on the other hand, the Congress followed the political agenda that promoted the political awakening among its followers (majority of them were the Hindus).

The Muslim community under the spell of religious leadership also failed to understand the effects of the Ottoman imperialism on the Arab countries. The news of the Arab revolt when received in India was not believed. This lack of political knowledge failed to create anti imperialist feelings among the Muslims. It is evident that even educated Muslims were not well aware of the Ottoman history and its decadent institutions, which were not based on Islamic teachings. It was just an emotional attachment that blinded them to probe and investigate the weaknesses of the Ottoman Empire.

8. Wastage of the Indian Muslims’ Energies

According to one interpretation that the involvement in the khilafat movement was nothing but a waste of the Indian Muslims’ energies. They forgot their internal problems and devoted their attention to the problem which was not related to them. That is why there was disappointment after the abolition of the khilafat. It left them in wilderness.

The Hindu-Muslim unity was short lived because it was based on emotionalism and not on political pragmatism. After the collapse of non-cooperation, Gandhi was criticised and condemned by the same ulama who adored him. It is said that he used the Muslim leadership to propagate his non-violence philosophy and left them in doldrums when he achieved his motives. Both symbols of the khilafat and non-cooperation were quite different in nature and could not be reconciled. The nationalist historians, who admire the role of Gandhi as a champion of Hindu Muslim unity during this period, forget the disastrous effects of the involvement of religion to politics.

Maulana Abdul Bari and Azad both issued a fatwa declaring Hindustan as a “Darul Harab” and therefore exhorted the Muslims that it was their religious duty to migrate from India. The common people especially from the Punjab and Sindh, after selling their belongings, left India for Afghanistan where, the Amir also promised to give them land and shelter. Once they reached there they found nothing and came back disappointed. During the whole campaign hundreds died and thousands suffered in a process of rehabilitation. Those who issued the fatwa did not follow it; both the rich and well off did not leave India. The sacrifice of the common people did not create any concern among the leadership.

The Mopla peasantry revolted against their landlords. Economic exploitation forced them to rebel repeatedly in the past. Now inspired by the symbol of the khilafat, they took arms and made attempts to improve their condition. The revolt was crushed and the Moplas suffered immensely. In this case nothing was done to ameliorate their grievances

The government of India urged that Muslim Ulema and scholars grant a fatwa to the effect that sympathy with Turkey was unlawful as per shariah. Some of the Mullahs did so but Maulana Abdul Bari refused. Soon after the post-war settlement, the Muslim scholars of India entered into practical politics on a nationwide scale with definite objects and Maulana Mahmood Hasan of Deoband founded Jamiat-i-Ulama-i-Hind in 1919.

During the observance of the first Khilafat Day on 17 October 1919, most Indian-owned shops remained closed in Calcutta, prayers were offered at different mosques, and public meetings were held all over Bengal. On 23-24 November 1919 the first All-India Khilafat Conference held in Delhi was presided over by AK Fazlul Huq from Bengal. It was resolved that pending a resolution of the Khilafat problem there would be no participation in the proposed peace celebrations, that British goods should be boycotted, and that a policy of non-cooperation with the government would be adopted.

K.B Sayeed writes:
“The twilight programme had become so popular that leaders like C.R. Das and Lala Rajpat Rai had to come round to the non-cooperation programme. But nothing could swerve Jinnah from the constitutional path that he was determined to follow.”

He never favoured the non-cooperation movement and when it was adopted in Dec 1920 at Nagpur Session of Congress; he resigned from Congress in protest.

“The result was that the Muslims emerged the movement with a feeling that they could neither the British nor the Hindu and they should be their own straight for self preservation.”
I.H. Qureshi: The Struggle for Pakistan