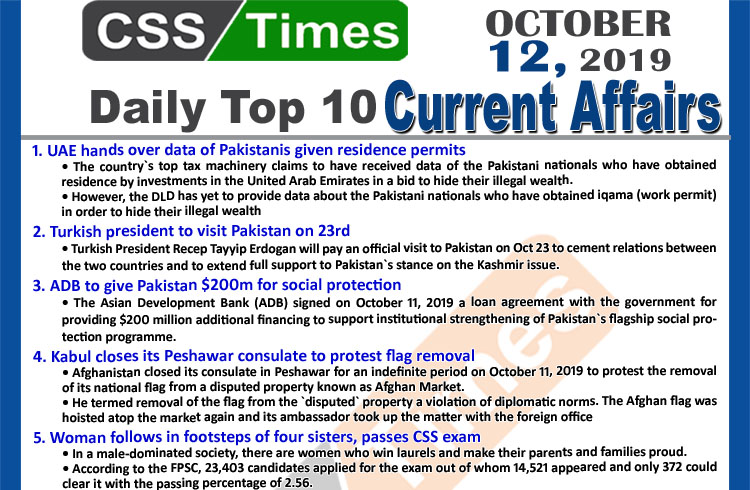 1. UAE hands over data of Pakistanis given residence permits

• The country`s top tax machinery claims to have received data of the Pakistani nationals who have obtained residence by investments in the United Arab Emirates in a bid to hide their illegal wealth.
• The data was collected from the Dubai Land Department (DLD) at the conclusion of a three-day (Oct 8-10) meeting in Dubai. Pakistan was represented in the meeting by Federal Board of Revenue (FBR) Secretary for International Taxes Sajida Kausar.
• Well-placed sources told Dawn that the FBR`s international taxes wing was scrutinising the data and those identified with correct addresses and accurate identification would be served notices for tax collection.
• However, the DLD has yet to provide data about the Pakistani nationals who have obtained iqama (work permit) in order to hide their illegal wealth

• Turkish President Recep Tayyip Erdogan will pay an official visit to Pakistan on Oct 23 to cement relations between the two countries and to extend full support to Pakistan`s stance on the Kashmir issue.
• Prime Minister Imran Khan on October 11, 2019 telephoned the Turkish president and said that Mr Erdogan would visit Pakistan `later this month`.
• According to Prime Minister Office (PMO), Mr Khan telephoned the Turkish president to exchange views on recent developments and apprised the latter that Pakistan fully understood Turkey`s concerns relating to terrorism.

3. ADB to give Pakistan $200m for social protection

• The Asian Development Bank (ADB) signed on October 11, 2019 a loan agreement with the government for providing $200 million additional financing to support institutional strengthening of Pakistan`s flagship social protection programme.
• The ADB-financed social protection development project, approved in October 2013, has enabled the enrollment of over 855,000 women beneficiaries to the Benazir Income Support Programme (BISP). The additional financing will ensure continuation of the ADB support to this initiative as well as help BISP to implement institutional strengthening measures.
• BISP considered one of the largest social protection programmes in South Asia is part of a larger government strategy called Ehsaas to reduce poverty and inequality. BISP, which is primarily funded by the government of Pakistan, supports Ehsaas through cash transfers, poverty graduation programs, and a targeted safety net.

• Afghanistan closed its consulate in Peshawar for an indefinite period on October 11, 2019 to protest the removal of its national flag from a disputed property known as Afghan Market.
• `We condemn removal of our national flag from the market by police and close down the consulate in Peshawar for an indefinite period, `Afghan Consul General Muhammad Hashim Niazi said at a press conference.
• He termed removal of the flag from the `disputed` property a violation of diplomatic norms. The Afghan flag was hoisted atop the market again and its ambassador took up the matter with the foreign office

• In a male-dominated society, there are women who win laurels and make their parents and families proud.
• Zoha Malik Sher proved that girls are a blessing not a curse as she made her family proud by passing the Central Superior Service (CSS) written exam, following in the footsteps of her four sisters who had already passed the competitive exam and are currently holding imponant positions in the bureaucracy.
• The Federal Public Service Commission (FPSC) on October 10, 2019 announced the results of the written pan of the CSS exam.
• According to the FPSC, 23,403 candidates applied for the exam out of whom 14,521 appeared and only 372 could clear it with the passing percentage of 2.56.
• Rawalpindi-based Zoha was among those who passed the written examination.

• Another feather to Pakistan’s leading actress Mehwish Hayat’s cap as she has been appointed a goodwill ambassador for girls’ rights by the Ministry of Human Rights.
• The recipient of the prestigious Tamgha-e-Imtiaz, Hayat, announced about her appointment in a video message on micro-blogging website, saying: “Delighted to be appointed by the Ministry of Human Rights as Goodwill Ambassador the rights of the girl child.”
• The ‘Load Wedding’ star – who has been vocal about humanitarian issues, said: “This is something close to me & I look forward to actively raising awareness of the issues to be addressed. Let’s give girls the better future they deserve.”

• Hailed as a visionary and reformer, Ethiopian Prime Minister Abiy Ahmed won the Nobel Peace Prize on October 11, 2019 for his efforts to resolve the long running conflict with neighbouring foe Eritrea.
• Abiy was honoured `for his efforts to achieve peace and international cooperation, and in particular for his decisive initiative to resolve the border conflict with neighbouring Eritrea, the Nobel Committee said.
• The award is seen as a welcome boost for Africa`s youngest leader as he faces worrying inter-community violence ahead of a parliamentary election in May 2020.
• `I was so humbled and thrilled when I just heard the news, Abiy told the Nobel Committee in a phone call posted online on the Nobel Prize website

• The Pentagon said it has approved the deployment of 3,000 additional troops and military hardware to Saudi Arabia, boosting the country`s defences after attacks on its oil installations blamed on Iran.
• US Secretary of Defense Mark Esper authorised the deployment of two more Patriot missile batteries, one THAAD ballistic missile interception system, two fighter squadrons and one air expeditionary wing, the Pentagon said in a statement.
• `Secretary Esper informed Saudi Crown Prince and Minister of Defence Mohammed bin Salman this morning of the additional troop deployment to assure and enhance the defense of Saudi Arabia,` it said.
• `Taken together with other deployments this constitutes an additional 3,000forces thathave been extended or authorised within the last month, it said.

• Alexei Leonov, a legendary Soviet cosmonaut who was the first man to perform a spacewalk in 1965, died in Moscow on October 11, 2019 aged 85 after a long illness.
• The Russian space agency Roscosmos said it was saddened to announce the death of `cosmonaut No 11` who was twice decorated with the country`s top honour the Hero of the Soviet Union. Tributes poured in from across the globe, with Western space agencies and experts praising Leonov`s contribution and admirers bidding him farewell.

• Nasa launched a satellite night to explore the mysterious, dynamic region where air meets space.
• The satellite called Icon, short for Ionospheric Connection Explorer rocketed into orbit following a two-year delay. It was dropped from a plane flying over the Atlantic off the Florida coast. Five seconds after the satellite’s release, the attached Pegasus rocket ignited, sending Icon on its way. 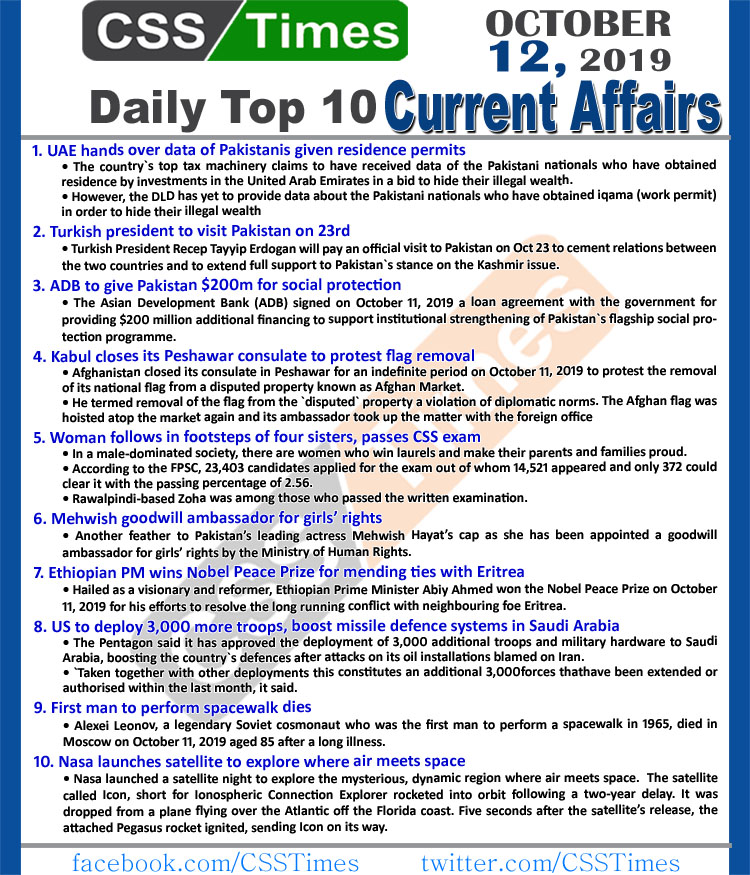