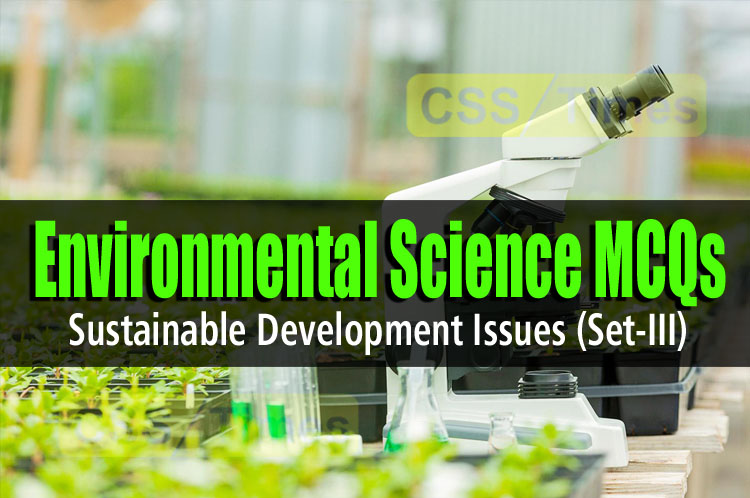 Which fossil fuel is formed from swamp plants that lived millions of years ago?
(a) Coal
(b) Nuclear
(c) Methane
(d) Natural gas
(e) Petroleum (crude oil)
Answer: (a)

In the year 2250, most of the world’s energy will likely come from…
(a) Coal and oil.
(b) Natural gas and coal.
(c) Nuclear power from uranium.
(d) A mix of renewable energy sources.
(e) Petroleum (crude oil) and natural gas.
Answer: (d)

Which type of electricity generation has the Least environmental Impact?
(a) Wind turbines on the top of mountains.
(b) A dam on a river to produce hydropower.
(c) A coal burning power plant in a rural area.
(d) A nuclear power plant on an island in a river.
(e) A geothermal power plant in a hot earth area.
Answer: (e)

Ecotype is a type of species in which environmentally induced variations are
(a) Temporary
(b) Genetically fixed
(c) Genetically not related
(d) None of the above
Answer: (b)

The term ‘Biocoenosis’ was proposed by
(a) Tansley
(b) Carl Mobius
(c) Warming
(d) None of the above
Answer: (b)

The pyramid of energy in any ecosystem is
(a) Always upright
(b) May be upright or invented
(c) Always inverted
(d) None of the above
Answer: (a)

An ecosystem must have continuous external source of
(a) Minerals
(b) Energy
(c) Food
(d) All of the above
Answer: (b)

Trophic levels are formed by
(a) Only plants
(b) Only animals
(c) Only carnivorous
(d) Organisms linked in food chain
Answer: (d)

Biotic potential is counteracted by
(a) Competition with other organisms
(b) Producer is the largest
(c) Limitation of food supply
(d) None of the above
Answer: (d)

In a food chain of grassland ecosystem the top consumers are
(a) Herbivorous
(b) Carnivorous
(c) Bacteria
(d) Either carnivorous or herbivorous
Answer: (b)

MAB stands for
(a) Man and biosphere
(b) Man (antibiotics and bacteria
(c) Man and biotic community
(d) Mayer, Anderson and Bisby
Answer: (a)

Species that occur in different geographical regions separated by special barrier are:
(a) Allopatric
(b) Sympatric
(c) Sibling
(d) None of the above
Answer: (a)

Which of the following is a nonrenewable energy resource?
(a) Solar
(b) Methane
(c) Hydroelectric
(d) Coal
Answer: (a)

A coal deposit that is not economical to mine today would be considered part of our __________
(a) Coal reserves
(b) Coal resources
(c) Coal reservoirs
(d) None of these
Answer: (b)

Energy resources derived from natural organic materials are called ________.
(a) Geothermal energy sources
(b) Fossil fuels
(c) Biomass
(d) All of these
Answer: (b)

Two-thirds of the world’s known oil reserves are located in ________.
(a) Siberia
(b) Gulf of Mexico and Caribbean
(c) The Middle East
(d) Indonesia
Answer: (c)

The world has the least amount of which of the following fuel types..
(a) Oil
(b) Coal
(c) Uranium
(d) There are roughly equal amounts of each of these fuels
Answer: (a)

Which country contains about 50% of the world’s coal resources?
(a) United States
(b) China
(c) Canada
(d) The former Soviet Union
Answer: (d)

Which of the following problems is associated with the burning of coal?
(a) Acid rain
(b) Carbon dioxide emissions
(c) Ash with toxic metal impurities
(d) All of these
Answer: (d)

Which of the following energy sources does not produce carbon dioxide?
(a) Oil
(b) Uranium
(c) Coal
(d) Natural gas
Answer: (b)

Which of the following statements regarding the nuclear accident at Chernobyl in the Ukraine in 1986 is false?
(a) Radioactive debris was blown into Scandinavia and Western Europe
(b) Hundreds of square miles of land surrounding Chernobyl was contaminated and made uninhabitable
(c) Food supplies in many countries had to be purified in order to be consumed
(d) Excess deaths from cancer may be in the thousands over the next 40 years
Answer: (c)

What type of energy is derived from heated groundwater?
(a) Solar energy
(a) Geothermal energy
(a) Hydroelectric energy
(a) Nuclear energy
Answer: (c)

The world faces an energy crisis because _________.
(a) World demand for energy will increase
(b) World oil production will peak and begin to decline
(c) Shortages and the resulting escalation of prices can shock the economic and political order
(d) All of the above
Answer: (d)

The country which has the largest single concentration of the poor people in the world is
(a) China
(b) Pakistan
(c) India
(d) Nepal
Answer: (c)

Which province as the largest percentage of poor in Pakistan?
(a) Punjab
(b) Sindh
(c) Khyber Pakhtunkhwa
(d) Baluchistan
Answer: (d)

Which area as the largest percentage of poor in Pakistan?
(a) FATA
(b) Gilget
(c) Azad Kashmir
(d) None of these
Answer: (a)

There has been a significant decline in poverty in the state of
(a) Sindh
(b) Punjab
(c) Azad Jammu & Kashmir
(d) Baluchistan
Answer: (c)
Poverty in Azad Jammu and Kashmir at 25 percent.

The calorie requirement is higher in rural areas because
(a) they do not enjoy as much as people in urban areas
(b) food items are expensive
(c) they are unemployed
(d) people are engaged in more physical Labour Important Questions
Answer: (d)