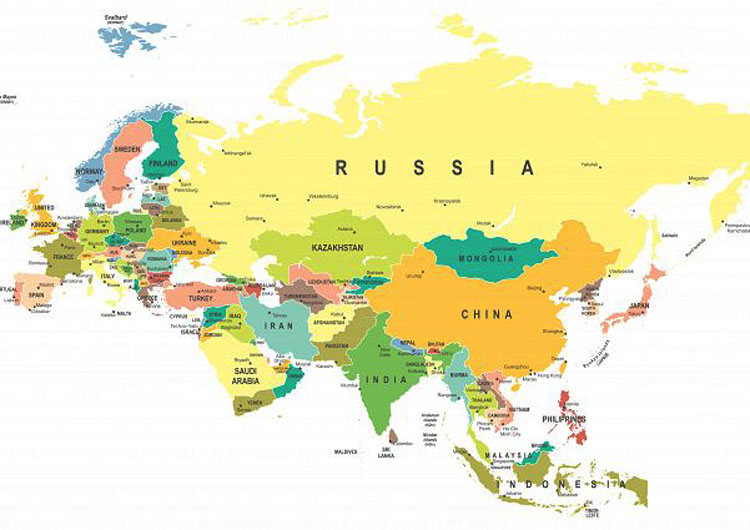 Transcontinental countries, mountains, and rivers are part of the physical border between Asia and Europe. However, political factors also play a part in its definition.

Boundaries between continents are somewhat a matter of geographical convention. The number of continents that the Earth is considered to have can range between six or seven, although the count can go as low as four when Afro-Eurasia and Americas are combined as continents. There are only three overland boundaries in existence. These boundaries include the ones between Asia and Europe, between Africa and Asia, and between North and South America.

Does The Europe-Asia Boundary Exist?

The border between Europe and Asia as it exists today was first defined by Philip Johan Von Strahlenberg, an explorer and a Swedish Army officer. His border followed the chains of the Ural Mountains; Emba River to the north coast of the Caspian Sea, and the Kuma-Manych Depression which exists on the Black Sea. The depression is a name of two rivers which lie on the northern part of the Caucasus Mountains and are currently considered to be the exact boundary. The eastern boundary between the two countries cut Russia into two, the European side of Russia and the Asian part. There is a significant uneven distribution of people between the two portions of the country with the European portion being home to over 75% of the population.

The Ural Mountain watershed forms a natural boundary separating the two continents. The Mountain range averages 3,000 to 4,000 feet above the sea level. The highest peak, Mount Narodnaya, measures 6,214 feet. From the Ural Sea, the boundary follows the unnavigable Ural River which ends and empties into the Caspian Sea. However, the segment covered by the Ural River is yet to be determined. The Caspian Sea forms the next major segment of the boundary. The sea is 746 miles long and 270 miles wide making it a large completely enclosed water body. The border demarcations are not universally definitive and vary from one source to another. Some geographers place the country of Georgia entirely in Europe while others classify it as a transcontinental country which spans both Asia and Europe. Cyprus is also placed in Asia by some geographers although the country is often accepted as being included in the modern definition of Europe. According to the EU’s geographic requirement, the definition of Europe is culturally and geographically intertwined and therefore is subject to political discretion.

How Did The Two Continents Come To Be?

The original continental separation was invented by ancient Greek Mariners who named the continents as Europe and Asia. The two masses of land were separated by a complex waterway flowing from the Aegean Sea to the Sea of Azov. However, the Greeks viewed the continent as physical entities with minimal cultural significance or political content. The threefold system by Herodotus divided the old world into three: Europe, Africa, and Asia. However, the Europe-Asia boundary remained unusual even among the Greek geographers and even Herodotus. The boundary between Asia and Europe was placed along the Phasis River by Anaximandar. The convention was also followed by the Herodotus in the 5th BC. However, a new convention emerged in the following centuries drawing the continental boundaries along the Tanais or the modern Don River. From the Middle Age through to the 18th century, the traditional division of the Eurasia into two continents followed Ptolemy with boundaries following along the Turkish Strait, the Black Sea, the Azov Sea, and the Don. However, in 1725, Philip Johan Von Strahlenberg departed from the Don boundary by drawing a boundary line along the Volga through Samara Bend and along the Ural Mountains.

By the mid-19th century, three main conventions had emerged. One was drawn along the Volga-Don Canal, the second following the Kuma-Manych Depression to Ural River while the third convention follows the Greater Caucasus Watershed to the Caspian Sea. The second convention, the boundary line following the Kuma-Manych Depression to the Caspian Sea, is the most popular convention today. Soviet geographers recommended that the boundary between the two continents be drawn in textbooks from Baydaratskaya Bay, along the eastern foot of the Ural Mountains. The Soviet definition of the boundary placed the Caucasus entirely in Asia while the Urals are entirely in Europe. Further, most Soviet Geographers preferred the boundary along the Caucasus Crest.