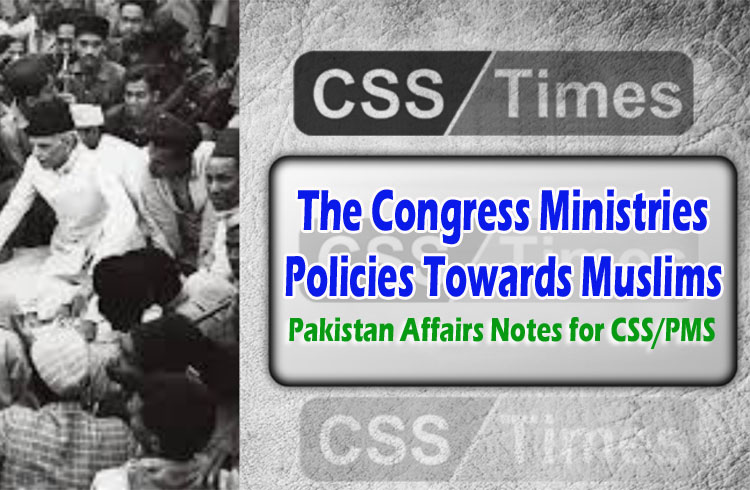 The Government of India Act, 1935 was not fully promulgated but the only provincial part was introduced in the country. Muslim League and the Congress criticized it but agreed to contest provincial elections.

The elections of 1937 were held with the restricted franchise and separate electorate. The Congress projected itself as an all-India force representing all religions and factions of the society. The Muslim League contested for the Muslim seats. There was a tough competition from the other Muslim organizations. The elections were completed in February 1937. The Congress got majorities in five provinces, Madras, U.P., C.P., Bihar, and Orissa. It emerged as the largest party in Bombay and won 704 out of 1585 general seats.

The Muslim League performed poorly in the elections and got only about 21 percent of Muslim seats without winning majority anywhere, Bengal, Punjab, NWFP, and Sind. It was mostly due to the organizational problems and opposition by local Muslim groups.

1. Dissolve AIML Parliamentary Board
2. AIML members not to function as a separate group
3. AIML members to express allegiance to the Congress

Definitely the above-mentioned terms were a device to subvert the existence of the Muslim League. Therefore, no agreement was possible on this issue.

First all Congress governments in the provinces launched anti-Muslim drive basically to exclude the ML and other Muslim organizations from the government making process. The Congress leaders had come to know that the ML had got roots in the masses. They started ‘Muslim Mass Contact’ movement to defame the ML in their favour. They were making cultural and educational policies that promoted the Hindu culture and symbols in the name of Indian culture. They introduced Banda-Mataram anthem from Annandmath in the institutions and offices etc. The Hindi language was given top most importance in their policies. Wardha Educational Scheme was to convert Muslims into Hindus through primary educational literature. Projection of Hindu heroes like Gandhi and distortion of Muslim history became their moral creed. They followed the policy of discrimination in services or new recruitment for jobs.

The Congress ministries adopted overall negative and cruel attitude, especially towards the Muslim activists. This unjust treatment compelled the Muslims to be disciplined in every sphere of life.

The Muslims were well aware of the theocratic inclination of the Hindu people. They arranged a close monitoring of the government. They publicized their policies and raised the issues. The mobilization of Muslims on these matters required keen probe to collect the original facts of the Hindu atrocities.

On March 28, 1938, the Council of ML appointed an eight-member committee under the presidentship of Raja Syed Muhammad Mehdi of Pirpur that presented its report on, November 15, 1938. It tried to dig out the cruelties of the Congress ministries in seven provinces. The report took up the Congress support to the rival Muslim organizations, intimidation and threats to the pro-Muslim League people.

The ML deputed Mr. Shareef with members to investigate the injustices under the dictatorial rule of the Hindus. This report mainly collected the facts, concentrating on ill treatment of the government with the Muslims in Bihar.

A. K. Fazl-ul-Haq published a pamphlet entitled Muslim Sufferings Under the Rule of Congress and made many alarming revelations e.g. forbidding of Azan, attacks in mosques, noisy processions of the Hindu scoundrels, forbidding of the cow-slaughter etc. This pamphlet responded the indictments by the Congress on the Muslims.

All the reports described the Congress government as an attempt to create ‘Hindu Raj’ that wanted to overwhelm the Muslim culture and their identity. It was a rigorous threat to the Muslims’ interests.

The Muslim League highlighted the issues and mobilized the Muslims to counter them adequately. It reorganized the Muslim community to cope with the situation. The ML arranged its session at Lucknow in October 1937. Many prominent leaders like Fazlul Haq participated in the session while Sikander Hayat and Saadullah announced their support to the ML.

The Muslim leaders shed a sharp criticism on the Congress policies. They protested against the reduction of status of Urdu and other Muslim related issues. They created realization, amongst the Muslims, of what can happen under the Congress rule and urged for serious thinking about the future political and constitutional arrangements. They unearthed the real objectives of the Congress and urged the need of unity among the Muslims under the banner of Muslim League.

The Second World War (September 1939) proved blessing for the Muslims in a sense that the Congress Ministries resigned in November 1939. The Muslims observed Day of Deliverance on December 22, 1939.

The ML redefined its position during the World War II. They expressed their enthusiasm that no constitution to be enforced without the consent of the Muslims. They eradicated their organizational weaknesses and refined their objectives keeping the experiences of the Congress ministries.