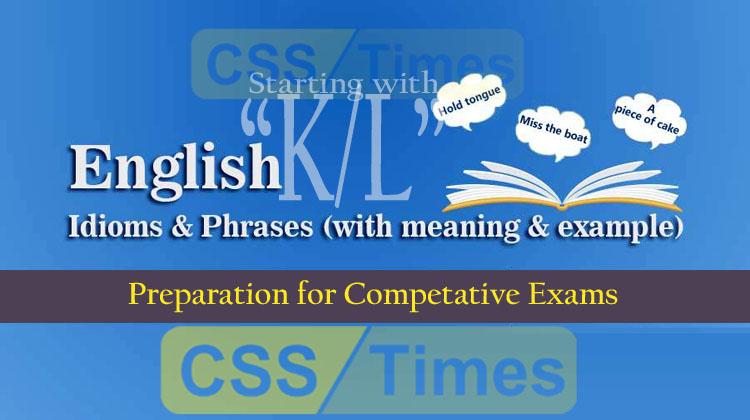 Keep a secret:
(Not tell anyone else) – I don’t think very high of him, but please keep it a secret.

Keep hold of:
(not let go) – You should have kept hold of the horse’s reins.

Keep one’s word:
(Abide by promises one has made; carry out undertakings or obligation into which one has entered) – You may depend upon his doing what he says, for he is a person who always keeps his word.

Kith and kin:
(Friends and relations) – He invited all his kith and kin to his wedding.

Know all answers:
(To be in complete command of a situation and perfectly able to deal with any developments, especially if too proud of this ability) – He is the perfect person to organise the group – he knows all the answers; you can’t tell her anything – she knows all answers.

Lame excuse:
(unsatisfactory reasons given to defend one’s conduct) – Arif had gone to movie but when his father asked him why he did not go to school, he gave a lame excuse saying he had gone a friend.

Learn one’s lesson:
(Reform after experiencing the consequences of mistakes) – He learned his lesson after losing his job for reaching his office always late.

Let the cat out of the bag:
(The secret is known; the mystery is explained) – The cat’s out of the bag now; it’s no wonder they don’t go ahead, for they know nothing’.

Long hours:
(The hours like ten, eleven, and twelve, which require the greatest number of strokes of the clock) – We dined at seven, but our talk continued to the long hours.

Look blue:
(Be sad or depressed) – He looked blue when he received the letter from his sister.

Lose heart:
(To become discouraged) – After more than fifty unsuccessful attempts to get a job, he began to lose heart.