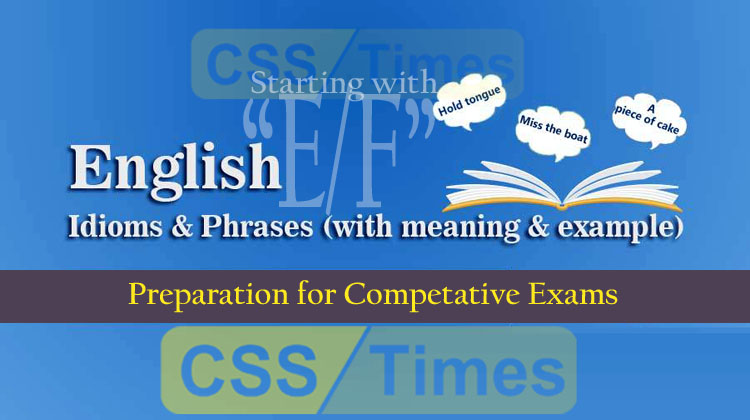 Eat one’s heart out:
(To make oneself ill by being unhappy, by longing for something one cannot have etc.) – The little girl was eating her heart out because she was not allowed to have a dog.

Eye-opener:
(Circumstances, etc. that brings enlightenment and surprise) – Appointment of army officers with district Nazim is an eye opener to politicians.

Face the music:
(Face trouble, punishment, reprimand, or the unpleasant consequences of one’s conduct) – There is no need for you to worry; if anything goes wrong it is I who will have to face the music.

Flash in the pan:
(A success that lasts a short time) – People expected her to become national champion but it seems her initial success was just a flash in the pan.

Flesh and Blood:
(human nature) – He is no exception in love he is flesh and blood after all.

Flog a dead horse:
(Waste one’s effort’s on something that is already decided) – Those who are trying to persuade him to change his mind are actually flogging a dead horse.

Follow in someone’s footsteps:
(Do as someone else did before) He has resigned from his job to follow in his father’s footsteps and become a politician.

For better or worse:
(Whatever the result may be) – For better or for worse we were now committed to our course of action.