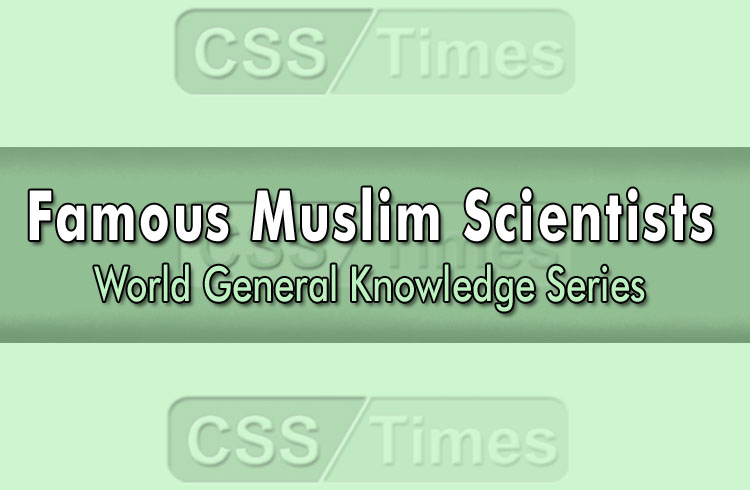 Abu Ali al-Hussain Ibn Abdallah Ibn Sina was a Persian physician and philosopher. He was born in 980 A.D. at Afshana near Bukhara (in present-day Uzbekistan) then capital of the Samanid Dynasty. He was an encyclopeadist, philosopher, physiologist, physician, mathematician, astronomer, logi1cian and poet. He gained the titles of Shaikh al-Ra’is (leader among the wise men) and Hujjat al-Haq (proof of God), displayed a remarkable aptitude for learning from an early age.

Jabir Ibn Hayyan, is generally known as the Father of Chemistry He was born in Tus and settled in Baghdad after the establishment of the Abbassid caliphate He is famous for writing more than one hundred monumental treatises, of which twenty-two deal with chemistry. Jabir’s major practical achievement was the discovery of minerals and acids, which he prepared for the first time in his alembic. It is on the basis of such works that he is regarded as the father of modern chemistry.

He was the first to introduce the laboratory experimental method, and the procedures he pursued in his researches are almost identical to those followed today.

The book of Poisons and Preventing Their Damages is the most famous work of Jabir and it is composed of five chapters. He divided poisons in it into animal, plant and rock poisons. He also mentioned the antidotes to these poisons and their reactions in the body. This book is considered a link between chemistry and medicine.

Numerous “firsts” in medical research, clinical care, and chemistry are attributed to him, including being the first to differentiate smallpox from measles, and the discovery of numerous compounds and chemicals including alcohol, kerosene, among others. Edward Granville Browne considers him as “probably the greatest and most original of all the physicians and one of the most prolific as an author”

Muslim Spain has produced some of the brightest intellectual luminaries of the Middle Ages. One of them was Ibn Rushd, better known as Averroes in the west who is universally acknowledged as the greatest philosopher of Islam and one of the greatest of all times. Ibn Rushd, known as Averroes in the west was born in Cordova, the metropolis of Muslim Spain Averroes, who was considered Avicenna of the west, applied himself to philosophy, mathematics, medicine, astronomy, logic and Islamic jurisprudence. Ibn Rushd was the most learned commentator of Aristotelian works and was more Aristotelian than Ibn Sina. He corrected some of the misconceptions of Ibn Sina about the rational philosophy of Aristotle.

Abu Raihan Mohammad Ibn Ahmad al-Biruni was one of the well-known figures associated with the court of King Mahmood Ghaznawi. Al-Biruni was a versatile scholar and scientist who had equal facility in physics, metaphysics, mathematics, geography and history. Born in the city of Kheva near “Ural” (located in Xorazm Province, Uzbekistan)

Abu Abdallah Muhammad ibn Musa Al-Khawarizmi. The last-mentioned name (his nisba) refers to his birthplace, Khwarizm, modern Khiva, south of the Aral Sea. He was born around 780 in the town of Kath part of Khwarism. Kath is now buried in the sand.He was a mathematician, astronomer and geographer. He was perhaps one of the greatest mathematicians who ever lived, as, in fact; he was the founder of several branches and basic concepts of mathematics.

He is considered as “Father of Algebra”.Ftom the title of his work, Hisab Al-Jabr wal Mugabalah (Book of Calculations, Restoration and Reduction), Algebra (Al-Jabr) derived its name.

Several of his books were translated into Latin in the early 12th century. In fact, his book on arithmetic, Kitab Al-Jam’a wal- Tafreeq bil Hisab Al-Hindi, was lost in Arabic but survived in a Latin translation. His astronomical tables were also translated into European languages and,later,into Chinese. His geography captioned Kitab Surat-Al-Ard,(The Face of the Earth) together with its maps, was also translated. In addition, he wrote a book on the Jewish calendar Istikhraj Tarikh Al-Yahud, and two books on the astrolabe. He also wrote Kitab Al-Tarikh and his book on sun-dials was captioned Kitab Al-Rukhmat, but both of them have been lost.

Al-Kindī known as “the Philosopher of the Arabs”, was Muslim Arab philosopher, mathematician, physician, and musician. Al-Kindi was the first of the Muslim peripatetic philosophers, and is unanimously hailed as the “father of Islamic or Arabic philosophy”for his synthesis, adaptation and promotion of Greek and Hellenistic philosophy in the Muslim world

On the scientific front, Al-Kindi plays a central role in Islamic scholarship for two principal reasons:

Al-Kindi was one of the first Arab scholars involved in studying and commenting on Greek scientific and philosophical manuscripts. He defined philosophy as “the establishment of what is true and right”.

He was a fertile writer; the total number of books written by him was 241, the prominent among which were divided as follows:

(Gerard of Cremona (1114–1187) was an Italian translator of scientific books from Arabic into Latin.)

Al-Haitham, known in the West as Alhazen, is considered as the father of modern optics. Ibn al-Haitham was born in 965 C.E. in Basrah (present Iraq), and received his education in Basrah and Baghdad. He traveled to Egypt and Spain. He spent most of his life in Spain, where conducted research in optics, mathematics, physics, medicine and development of scientific methods. He was called the “Physicist” in medieval Europe and nicknamed Ptolemaeus Secundus (Ptolemy the Second), according to the historian Henry Corbin.

Ibn Al Haytham’s most important work is “Kitab Al Manazir” (The Book of Optics), a seven-volume treatise written between 1011 and 1021, and translated into Latin at the end of the 12th century.

Ibn Al Haytham’s most famous work on astronomy is “Hay’at Al ‘Alam” (On the Configuration of the World), in which he presents a non-technical description of how the abstract mathematical models of Ptolemy’s “Almagest” can be understood according to the natural philosophy of his time.

Al-Tusi, Nasir al-Din was one of the greatest scholars of his time and one of the most influential figures in Islamic intellectual history. He was a scientist, mathematician, astronomer, philosopher, and theologian. He created ingenious mathematical models for use in astronomy.

Ghiyath al-Din Abul Fateh Omar Ibn Ibrahim al-Khayyam was born at Nishapur (Iran) Persian mathematician, astronomer, philosopher, physician and poet, he is commonly known as Omar Khayyam. Khayyam means the tent-maker, and although generally considered as Persian Khayyam was also a well-known poet. In this capacity, he has become more popularly known in the Western world since 1839, when Edward Fitzgerald published an English translation of his Rubaiyat (quatrains).

Abu Nasr Mohammad Ibn al-Farakh al-Farabi was born in a small village Wasij, near Farab in Turkistan He lived through the reign of six Abbasid Caliphs. As a philosopher and scientist, he acquired great proficiency in various branches of learning and is reported to have been an expert in different languages

Farabi contributed considerably to science, philosophy, logic, sociology, medicine, mathematics and music. His major contribution seems to be in philosophy, logic and sociology and, of course, stands out as an Encyclopedist. As a philosopher, he may be classed as a Neoplatonist who tried to synthesize Platonism and Aristotelism with theology and he wrote such rich commentaries on Aristotle’s physics, meteorology, logic, etc., in addition to a large number of books on several other subjects embodying his original contribution, that he came to be known as the ‘Second Teacher’ (al-Mou’allim al-Thani) Aristotle being the First. One of the important contribu- tions of Farabi was to make the study of logic more easy by dividing it into two categories viz., Takhayyul (idea) and Thubut (proof).