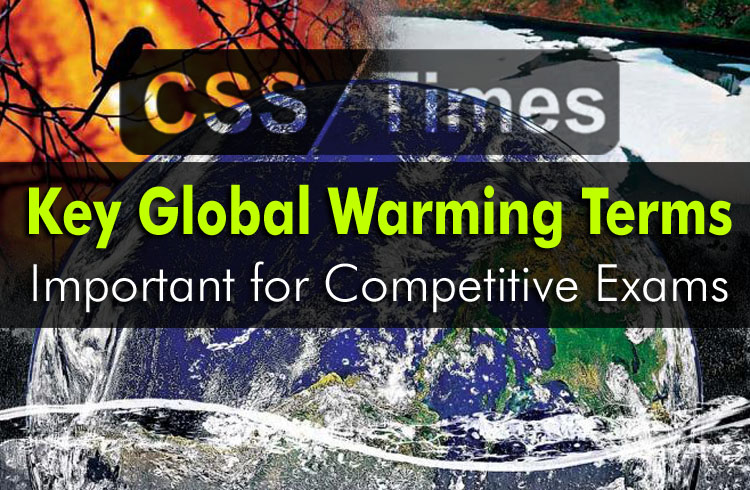 The chemical compound carbon dioxide (also known by its shorthand CO2) is the primary greenhouse gas and driver of climate change.

A greenhouse gas is a chemical compound found in the Earth’s atmosphere, such as carbon dioxide, methane, water vapor and other human-made gases.

In the climate change space, emissions refer to greenhouse gases released into the air that are produced by numerous activities, including burning fossil fuels, industrial agriculture and melting permafrost, to name a few. These gases cause heat to be trapped in the atmosphere, slowly increasing the Earth’s temperature over time.

It’s all about timing when it comes to differentiating weather and climate. Weather refers to atmospheric conditions in the short term, including changes in temperature, humidity, precipitation, cloudiness, brightness, wind and visibility. While the weather is always changing, especially over the short term, climate is the average of weather patterns over a longer period of time (usually 30 or more years).

Global warming is an increase in the Earth’s average surface temperature from human-made greenhouse gas emissions.

On the other hand, climate change refers to the long-term changes in the Earth’s climate, or a region on Earth, and includes more than just the average surface temperature. For example, variations in the amount of snow, sea levels and sea ice can all be consequences of climate change.

Fuels, such as oil and coal, that are made from the fossils of old plants, which have taken hundreds of thousands of years to form underground.

Sea-level rise as it relates to climate change is caused by two major factors. First, more water is released into the ocean as glaciers and land ice melts. Second, the ocean expands as ocean temperatures increase. Both of these consequences of climate change are accelerating sea-level rise around the world, putting millions of people who live in coastal communities at risk.

Global average temperature is a long-term look at the Earth’s temperature, usually over the course of 30 years, on land and sea.

Renewable energy is energy that comes from naturally replenished resources, such as sunlight, wind, waves and geothermal heat.

The United Nations Framework Convention on Climate Change (UNFCCC) is an environmental treaty that nations joined in 1992, with the goal of stabilizing greenhouse gas concentrations in the atmosphere at a level that would prevent dangerous human interference with the climate system.

Meanwhile, the Conference of the Parties (COP) to the UNFCCC is a yearly international climate conference where nations assess progress and determine next steps for action through the UNFCCC treaty.

INDC stands for “Intended Nationally Determined Contribution.” In preparation for the UN climate talks, countries have outlined what actions they intend to take beginning in 2020 under a proposed global climate agreement. These plans are known as INDCs, which will play a big part in moving us forward on the path toward a low-carbon, clean energy future.

IPCC is the acronym for the Intergovernmental Panel on Climate Change. First set up in 1988 under two UN organizations, the IPCC surveys the research on climate change happening all around the world and reports to the public about the current state of our scientific knowledge.

Methane is a chemical compound that’s the main component of natural gas, a common fossil fuel source. Just like carbon dioxide, methane is a greenhouse gas that traps heat in the atmosphere. Many people don’t understand the negative effects of methane as an alternative to other fossil fuels. While methane doesn’t stay in the atmosphere as long as carbon dioxide, it absorbs 84 times more heat, making it very harmful to the climate.

Mitigation refers to an action that will reduce or prevent greenhouse gas emissions, such as planting trees in order to absorb more CO2. It can also include developing and deploying new technologies, using renewable energies like wind and solar, or making older equipment more energy efficient