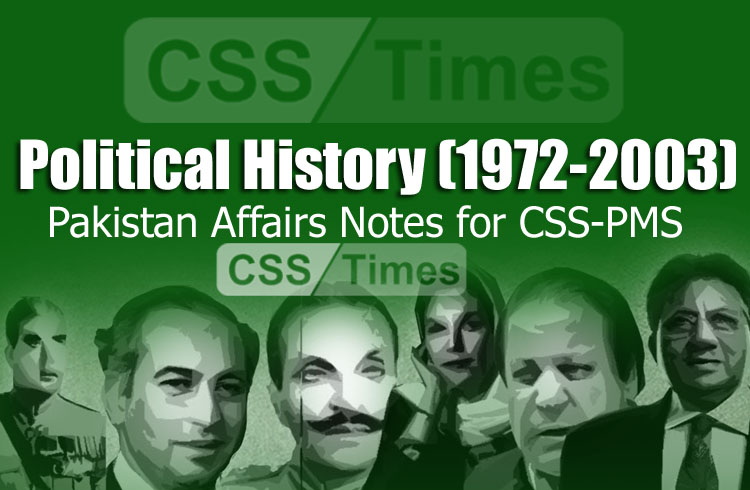 The major policy of Mr. Bhutto was Nationalisation. His government nationalised:

A new Labour Policy was announced in which more rights and concessions were given to the working classes.

Under new Health Policy cheap medicine and facilities were promised to the masses.

Administrative Reforms were introduced to eradicate corruption in the country. Hundreds of civil servants were removed on the charge of corruption.

Reforms were good in outlook but as their results were not according to the expectations of the masses. Discontentment took the place of initial optimism.

As a result of elections of 1977 PPP won the elections. But joint opposition blamed a mass rigging in the election results. They demanded fresh elections. Bhutto initially was stubborn but later showed inclination to compromise but history has taken a U-turn. As he refused to negotiate the elected majority party in 1971, now opposition refused to compromise and took the case to the streets. Urban shopkeepers, businessmen, students, women and even the intelligentsia joined hands against the government. The result was the third Martial Law and end of democracy.

Chief of Army Staff General Mohammad Zia-ul-Haq took over and imposed Martial Law. He suspended constitution. It was the longest military Rule in the history of Pakistan. To justify his rule Zia-ul-Haq presented his Agenda about:

Zia-ul-Haq promised Elections first within 90 days, and then extended this period after the reforms. These reforms included:

Accountability of the ousted regime;

In his way of Islamisation of the system he introduced many steps for forging cooperation of some Islamic groups.

He also introduced Constitutional and legal changes to emphasis on Islamic values in the society. He established:

In order to return to democracy Zia-ul-Haq took the following measure:

Democracy was restored but no civilian government could complete its tenure of five years and became the victim of 58-2B of 8th amendment by virtue of that President can dissolve NA and dismiss the elected government.

Civilian government adopted policies for the welfare and betterment of the people but their effects were compromised due to several reasons:

In 1999 again Military Rule was imposed against the civilian government’s attempt to concentrate power in the office of Prime Minister. Nawaz government introduced political and constitutional changes to have a complete control on all branches of the government.

Nawaz government’s attempt to remove the Army Chief, while he was out of the country and returning from his visit to Sri Lanka, proved counter productive. General Musharraf took over as the Chief Executive of the country and suspended the constitution. Martial law was not declared. No military courts were established. Political and press freedoms remained intact.

General Musharraf designed the following policies to achieve these goals:

In the process of Return to Democracy he held:

In the new set up Musharraf is President in uniform. Mir Zafer-Ullah-Khan Jamali was the head of a coalition government. In three provinces there are governments of Muslim League (Q) and in NWFP there is the government of MMA working successfully.

Let’s hope for the gradual consolidation of democratic rule.