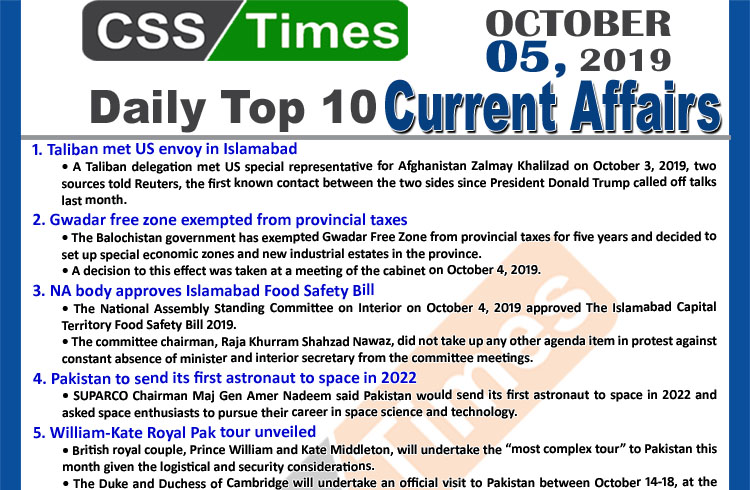 1. Taliban met US envoy in Islamabad

• A Taliban delegation met US special representative for Afghanistan Zalmay Khalilzad on October 3, 2019, two sources told Reuters, the first known contact between the two sides since President Donald Trump called off talks last month.
• President Trump halted the talks, which aimed at a plan to withdraw US troops from Afghanistan in exchange for Taliban security guarantees, following the death of a US soldier and 11 others in a Taliban bomb attack in Kabul.
• However, the sources cautioned that the meeting in Islamabad, which lasted more than an hour, did not represent a resumption of form al negotiations.
• `The Taliban officials held a meeting with Zalmay Khalilzad…all I can tell you is that Pakistan played a big role in it to convince them how important it was for the peace process,` a senior Pakistan official told Reuters, but declined to be identified as he was not authorised to speak publicly.

• The Balochistan government has exempted Gwadar Free Zone from provincial taxes for five years and decided to set up special economic zones and new industrial estates in the province.
• A decision to this effect was taken at a meeting of the cabinet on October 4, 2019.
• Talking to reporters after the meeting, provincial government spokesman Liaquat Ali Shahwani said a detailed discussion was held on the Reko Dig case and the government`s moves in this regard. He said the cabinet had decided to develop mineral resources of Balochistan.
• The cabinet also decided to set up a modern laboratory to analyse minerals.

• The National Assembly Standing Committee on Interior on October 4, 2019 approved The Islamabad Capital Territory Food Safety Bill 2019.
• The committee chairman, Raja Khurram Shahzad Nawaz, did not take up any other agenda item in protest against constant absence of minister and interior secretary from the committee meetings.
• However, the committee meeting, held in the Parliament House, approved the bill which was moved by Ali Nawaz Awan.
• The basic objective of the bill is to keep a check on whole chain of food items from raw material to its sale and even from production to the sale points.

4. Pakistan to send its first astronaut to space in 2022

• SUPARCO Chairman Maj Gen Amer Nadeem said Pakistan would send its first astronaut to space in 2022 and asked space enthusiasts to pursue their career in space science and technology.
• He was speaking at the opening ceremony of a two-day World Space Week being observed at the Institute of Space Technology (IST) at the Pakistan Space and Upper Atmosphere Research Commission (SUPARCO) here on October 4, 2019.
• The week is held to generate space awareness among students belonging to schools and colleges in Rawalpindi and Islamabad.
• The SUPARCO chief stressed the importance of research and innovation in the fields of science and technology.

• British royal couple, Prince William and Kate Middleton, will undertake the “most complex tour” to Pakistan this month given the logistical and security considerations.
• Citing a statement by the Communications Secretary to the Duke and Duchess of Cambridge, the BHC said: “This is the most complex tour undertaken by the Duke and Duchess to date, given the logistical and security considerations. Pakistan hosts one of Britain’s largest overseas networks, with the British High Commission in Islamabad being one of the UK’s largest diplomatic missions in the world.”
• The Duke and Duchess of Cambridge will undertake an official visit to Pakistan between October 14-18, at the request of ‘The Foreign and Commonwealth Office.’ This will be their first official visit to Pakistan.

• In a bid to provide access to `Right of Information` to the citizens, National Assembly (NA) Speaker Asad Qaisar on October 4, 2019 opened the doors of the lower house to the general public.
• According to the National Assembly Secretariat (NAS), a special `common man`s gallery` has been established for the first time in the parliamentary history of the country so that the common man can witness the proceedings of the house.
• The speaker inaugurated the gallery and a well-equipped reception established at the entrance of Parliament House.
• The basic idea behind the opening of the doors of the NA is to provide ease to the citizens to reach their public representatives.

• The European Union is allocating €300,000 (Rs 51.4 million) to provide emergency humanitarian assistance to families affected by the earthquake that struck Pakistan’s eastern region in September.
• The funding will address the most pressing needs of around 3,000 vulnerable people in some of the hardest-hit areas.
• “We are acting fast to channel emergency aid to those most affected in Pakistan,” said the Head of the EU Civil Protection and Humanitarian Aid Operations Office in Islamabad, Bernard Jaspers-Faijer.

8. US conducts joint patrol with Turkey in northeast Syria

• The US-led coalition and Turkey conducted their third joint patrol in northeastern Syria on October 4, 2019, part of a plan designed to defuse tensions between Washingtons two allies Turkey and the Syrian Kurds.
• The patrol followed a telephone call late on Thursday between Turkish Defense Minister Hulusi Akar and US Defense Secretary Mark Esper during which Akar reiterated that Turkey wont accept a delay in the creation of what it calls a safe zone and would act alone if necessary to set it up.
• Akar also told Esper that Turkey would end the joint patrols if there are distractions, delays and urged the US to end its support to Syrian Kurdish fighters.

• The Indian Air Force (IAF) confirmed for the first time on October 4, 2019 that it shot down one of its own helicopters during skirmishes with Pakistan in February over occupied Kashmir, killing all six on board.
• `A court of inquiry was completed and it was our mistake that our missile hit our chopper,` said the head of the Air Force, Air Chief Marshal Rakesh Kumar Bhadauria.
• `We will ensure such mistakes are not repeated in future,`he toldreporters.
• The military helicopter was downed on Feb 27 as Indian and Pakistani aircraft engaged in dogfights over occupied Kashmir in their most serious military skirmish in years.
• The helicopter crashed close to the airport on the outskirts of occupied Srinagar.
• Bhadauria said the air force is taking punitive action against two officers. He said the inquiry had found `vital gaps` in communica-tion and coordination between the ground staff and the crew of the chopper.

• A man paralysed in a night club accident can walk again thanks to a brain-controlled exoskeleton in what scientists say is a breakthrough providing hope to tetraplegics seeking to regain movement.
• The French patient trained for months, harnessing his brain signals to control a computer-simulated avatar to perform basic movements before using the robot device to walk.
• Doctors who conducted the trial cautioned that the device is years away from being publicly available but stressed that it had `the potential to improve patients` quality of life and autonomy`.
• The man involved, identified only as Thibault, a 28-year-old from Lyon, said the technology had given him a new lease of life.
• Four years ago that life changed forever when he fell 12 metres from a balcony while on a night out, severing his spinal cord and leaving him paralysed from the shoulders down. 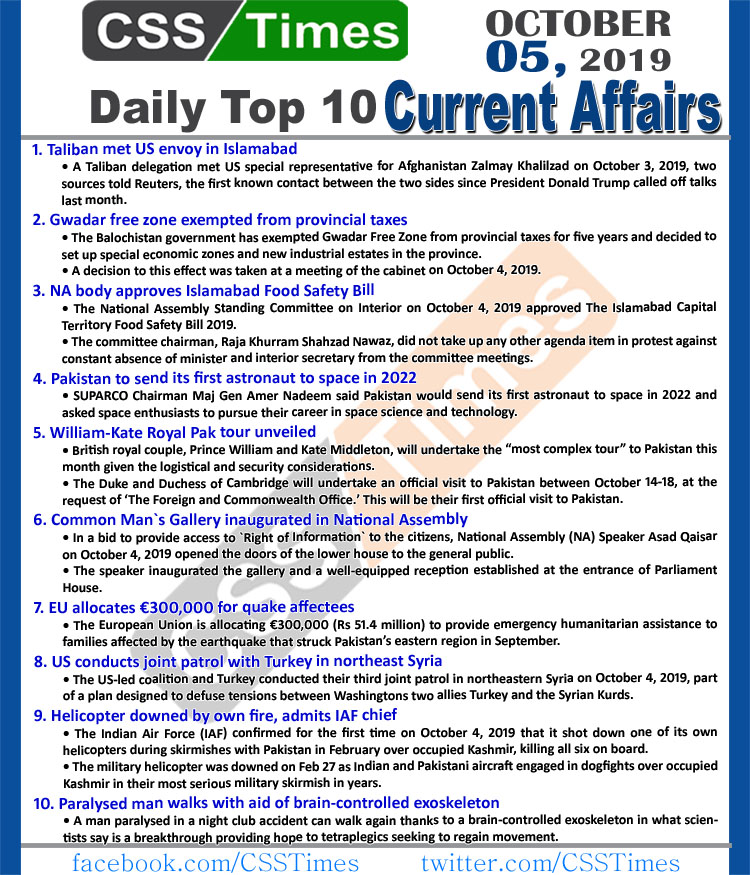