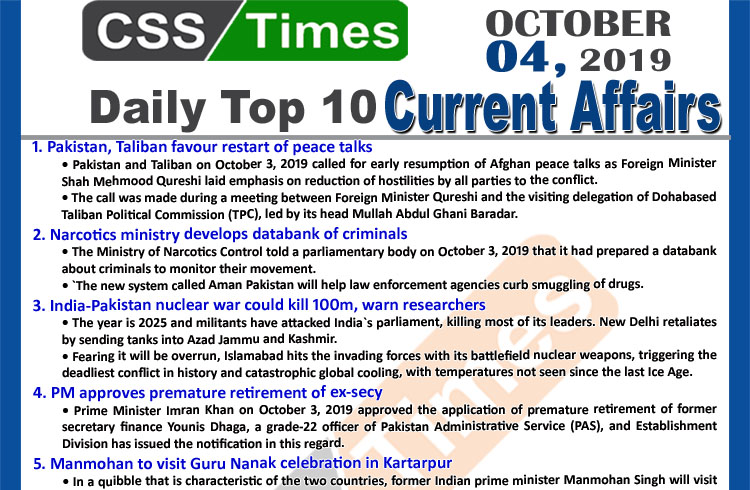 • Pakistan and Taliban on October 3, 2019 called for early resumption of Afghan peace talks as Foreign Minister Shah Mehmood Qureshi laid emphasis on reduction of hostilities by all parties to the conflict.
• The call was made during a meeting between Foreign Minister Qureshi and the visiting delegation of Dohabased Taliban Political Commission (TPC), led by its head Mullah Abdul Ghani Baradar.
• A statement issued after the meeting said: `Both sidesagreed ontheneedfor earliest resumption of the peace process.
• The TPC delegation is visiting Islamabad on an invitation of the Pakistan government for a discussion on the prospects of resumption of stalled peace talks between the United States and Taliban. Simultaneously, US Special Envoy for Afghan Reconciliation Ambassador Zalmay Khalilzad is also here.

• The Ministry of Narcotics Control told a parliamentary body on October 3, 2019 that it had prepared a databank about criminals to monitor their movement.
• `The new system called Aman Pakistan will help law enforcement agencies curb smuggling of drugs.
• Through Aman Pakistan, LEAs will also monitor accomplices of drug smugglers,` ministry`s secretary Amjad Javed Saleemi told the Senate Standing Committee on Narcotics Control.
• According to Narcotics Control Minister Sheheryar Afridi, several countries in Europe and the Middle East, including the United Kingdom and the United Arab Emirates, are seeking assistance from Pakistan toprovide particulars of certain individuals maintained in the databank.

• The year is 2025 and militants have attacked India`s parliament, killing most of its leaders. New Delhi retaliates by sending tanks into Azad Jammu and Kashmir.
• Fearing it will be overrun, Islamabad hits the invading forces with its battlefield nuclear weapons, triggering the deadliest conflict in history and catastrophic global cooling, with temperatures not seen since the last Ice Age.
• This scenario was modelled by researchers in a paper published on October 2, 2019, which envisaged more than 100 million immediate deaths, followed by global mass starvation after megatons of thick black soot block out sunlight for up to a decade.
• It comes at a time of renewed tensions between Pakistan and India over Kashmir, with both sides rapidly building up their atomic arsenals.
• They currently each have about 150 nuclear warheads at their disposal, with the number expected to climb to more than 200 by 2025.

• Prime Minister Imran Khan on October 3, 2019 approved the application of premature retirement of former secretary finance Younis Dhaga, a grade-22 officer of Pakistan Administrative Service (PAS), and Establishment Division has issued the notification in this regard.
• According to the notification, “The competent authority has been pleased to accord approval to the request of premature retirement of Mr Muhammad Younus Dhaga, a BS-22 of Pakistan Administrative Service, presently posted as OSD, Establishment Division, with immediate effect.”
• Dhaga performed well as secretary water and power and lead the plan as how to resolve the issue of electricity load shedding across the country.

• In a quibble that is characteristic of the two countries, former Indian prime minister Manmohan Singh will visit the Guru Nanak celebrations in Pakistan on the invitation of Indian Punjab Chief Minister Amarinder Singh, an indirect way of saying that Pakistan`s invitation to the Indian leader was not a factor.
• An announcement to this effect was made on October 4, 2019 by the chief minister`s office.
• A subtext of the reported move could become an even more important development. Mr Amarinder Singh was quoted by the Times of India as saying that Prime Minister Narendra Modi and President Ram Natha Kovind had accepted his invitation to be part of the event. The report was sufficiently vague about whether Mr Modi or Mr Kovind would visit Kartarpur without a form al invitation from Pakistan.
• The Kartarpur corridor is being built by India and Pakistan in Pakistan`s Kartarpur and connects to Dera Baba Nanak shrine in the Gurdaspur district of Punjab. The corridor aims at facilitating visa-free movement of Indian pilgrims who will just need a permit to visit Kartarpur Sahib located across the Ravi river, about four kilometres from the Dera Baba Nanak shrine.

6. US reopens embassy in Somalia after 28 years

• The United States said on October 2, 2019 it had reopened an embassy in Somalia`s capital, 28 years after it was shut as the country plunged into civil war, highlighting warming ties between the two nations.
• Washington closed its embassy during the 1991 overthrow of president Siad Barre`s military regime which ushered in decades of chaos, however diplomatic relations have strengthened in recent years.
• `Today we reaf firm the relations between the American people and the Somali people, and our two nations,` said Ambassador Donald Yamamoto in a statement.

• In a shocking development, some of Mahatma Gandhi`s remains were stolen on what would have been his 150th birthday, BBC reported on October 3, 2019.
• The famous leader`s ashes were taken from a memorial in central India, where they had been kept since 1948 the year of his assassination by a Hindu extremist.
• The people behind the bizarre incident also scrawled the word `traitor` in green paint across photographs of the leader who is revered widely.
• Some Hindu hardliners oppose Gandhi and his views because he advocated Hindu-Muslim unity. This is despite the fact that he was a devout Hindu himself.

• Ride-hailing company Uber Technologies Inc is taking to the air in New York City where users with a little cash to spare will be able to book helicopter flights to John F. Kennedy International airport through their apps.
• The company announced its Uber Copter offer on Thursday, saying flights to and from Lower Manhattan would be available to all Uber users. Uber made the feature available to its premium members in June.
• The roughly eight-minute flight will cost between $200 and $225 per person and include ground transportation on either side of the trip. Passengers can bring along a small suitcase and have to watch a safety video before take off, similar to that on an airplane

• Uber is testing new ground with an app to put casual workers in touch with employers, as it faces an increasingly tough climate for its core ride-hailing business. Uber Works will allow cleaners, bar staff and warehouse workers to compare pay rates and sign up for shifts. The app, which launches on Friday, will initially only be available in Chicago.
• It will compete with a range of rival apps in the US market including Wonolo, Workpop and Shiftgig. The move comes as several parts of the world tighten regulation around Uber’s operations as a ride-hailing firm. California recently passed legislation designed to pave the way for so-called “gig workers” to become employees and gain additional rights, which is expected to increase costs for firms such as Uber. ‘Vetted and qualified’ workers. Millions of American workers use staffing agencies, Uber said in a blog post announcing the venture.

• Scientists at Britain`s national synchrotron facility have harnessed powerful light beams to virtually unwrap and decipher fragile scrolls dating back some 2,000 years in a process they hope will provide new insights into the ancient world.
• The two complete scrolls and four fragments from the so-called Herculaneum library, the only one surviving from antiquity were buried and carbonised by the deadly eruption of Mount Vesuvius in AD79 and are too fragile to be opened. The items were examined at the Diamond Light Source facility in Oxford shire, home to Britain`s synchrotron, a particle accelerator in which beams travel around a closed loop path to produce light many times brighter than the sun.
• `The idea is essentially like a CT scanner where you would take an image of a person, a three-dimensional image of a person and you can slice through it to see the different organs,` said Laurent Chapon, physical science director of Diamond Light Source 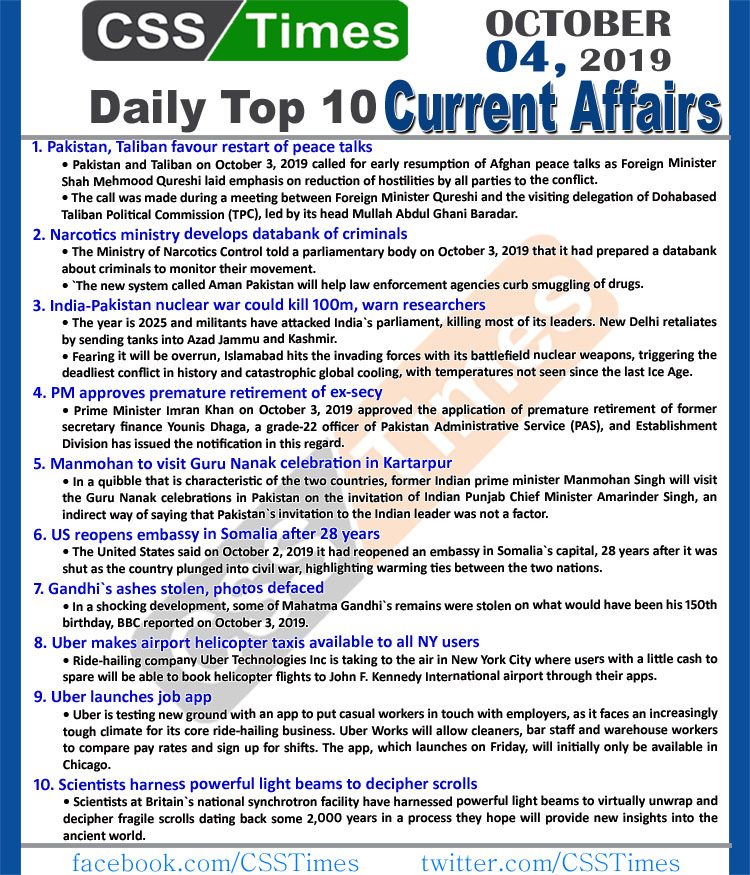