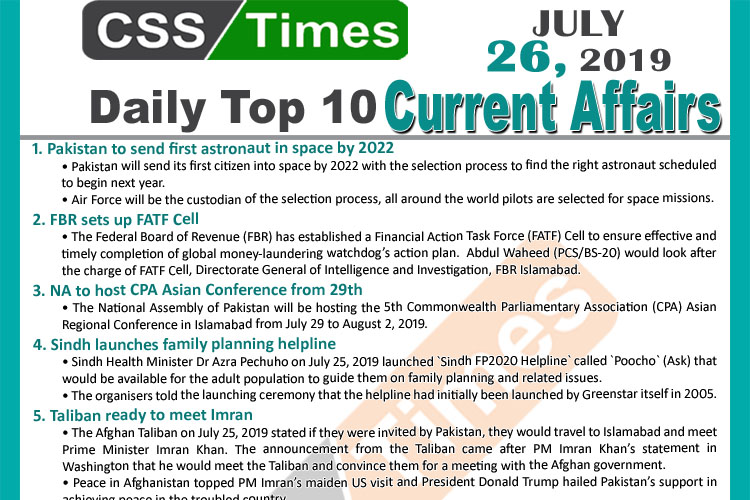 1. Pakistan to send first astronaut in space by 2022

• Pakistan will send its first citizen into space by 2022 with the selection process to find the right astronaut scheduled to begin next year.
• Minister for Science and Technology Fawad Chaudhry on July 25, 2019 took to Twitter saying the election process to send the first Pakistani into space will begin from February 2020.
• “Fifty people will be shortlisted list will then come down to 25 and in 2022 we will send our first person to space, this will be the biggest space event of our history.”
• On July 22, 2019, India launched a rocket into space in an attempt to safely land a rover on the moon. China, Russia and the United States are the only other nations to have sent missions to the moon.
• Air Force will be the custodian of the selection process, all around the world pilots are selected for space missions.

• The Federal Board of Revenue (FBR) has established a Financial Action Task Force (FATF) Cell to ensure effective and timely completion of global money-laundering watchdog’s action plan.
• According to a notification, the FATF Cell will be headed by a director general in Directorate General of Intelligence and Investigation, FBR Islamabad. The cell would serve as a focal point for all activities related to customs compliance to FATF issues. The cell may seek information required for the FATF-related work from the FBR, field formations and directorates. The head of field formations and directorates have been asked to create enabling environment for this unit considering its sensitive nature, according to the notification. The FBR has transferred five officers to FATF Cell/directorate of CBCM. The officers have been relieved of their duties to report at new place of posting with immediate effect till further orders.
• Abdul Waheed (PCS/BS-20) would look after the charge of FATF Cell, Directorate General of Intelligence and Investigation, FBR Islamabad, in addition to his own duties.

• Sindh Health Minister Dr Azra Pechuho on July 25, 2019 launched `Sindh FP2020 Helpline` called `Poocho` (Ask) that would be available for the adult population to guide them on family planning and related issues.
• `This helpline is a reliable source of 24/7 family planning, sexual and reproductive health (SRH) information and counselling services, especially for adolescents and youth,` said an official after the facility was formally opened by the minister at a hotel.
• The helpline has been designed and introduced by the health ministry in collaboration with Greenstar Marketing (GSM), officials in the event said.
• The organisers told the launching ceremony that the helpline had initially been launched by Greenstar itself in 2005.

• The Afghan Taliban on July 25, 2019 stated if they were invited by Pakistan, they would travel to Islamabad and meet Prime Minister Imran Khan. The announcement from the Taliban came after PM Imran Khan’s statement in Washington that he would meet the Taliban and convince them for a meeting with the Afghan government.
• Talking to BBC via telephone from Doha, where the movement has established a political office, Taliban Spokesperson Sohail Shaheen said if they are given a formal invitation by Pakistan, they would visit. “We often visit regional countries and would surely go there because Pakistan is our neighbour and Muslim country,” he said.
• Peace in Afghanistan topped PM Imran’s maiden US visit and President Donald Trump hailed Pakistan’s support in achieving peace in the troubled country.

• Tunisia’s President Beji Caid Essebsi, the North African country’s first democratically elected leader, has died at the age of 92, according to the presidency.
• One of the world’s oldest leaders, Essebsi died at the Tunis military hospital on July 25, 2019 morning, the presidency said in a statement.
• He was hospitalised with a severe illness in late June, but returned to intensive care on Thursday, his son said. Earlier, Hafedh Caid Essebsi told AFP news agency that “things are not going well”.
• Drafted in as prime minister in 2011 after longtime ruler Zine El Abidine Ben Ali was toppled, Essebsi was elected president three years later, becoming the country’s first directly elected head of state after its Arab Spring uprising. As prime minister, he helped draft a new democratic constitution guaranteeing fundamental rights such as freedom of speech, and preparing Tunisia for free elections.

• North Korea has fired two short-range missiles into the sea, South Korea’s Joint Chiefs of Staff (JCS) said.
• They were launched over the sea early on July 25, 2019, from Wonsan on North Korea’s east coast.
• A JCS official said at least one of the missiles travelled about 690km (428 miles) and appeared to be a new design.
• It marks the first time North Korea has fired any missiles since leader Kim Jong-un’s impromptu meeting with Donald Trump late last month.

• President Donald Trump on July 24, 2019 vetoed three congressional resolutions barring billions of dollars in weapons sales to countries including Saudi Arabia and the United Arab Emirates, which are engaged in a devastating war in Yemen.
• The resolutions `would weaken America`s global competitiveness and damage the important relationships we share with our allies and partners`, Trump said in letters to the Senate justif ying blocking them.
• It is the third time the president has employed his veto power since taking office.
• The measures cleared Congress this month in a strong rebuke to Trump, whose administration took the extraordinary step of bypassing legislators to approve the sales in May.

• Spain’s caretaker socialist prime minister Pedro Sanchez lost a crunch post-election vote of confidence on July 25, 2019 after coalition talks with the far-left failed.
• Sanchez faced the vote in parliament after his Socialist party won most seats in an inconclusive general election in April without securing a majority.
• On July 25, 2019, apart from the 123 lawmakers of his own party, just one other deputy from a regional grouping supported the Socialist leader, leaving him far from the simple majority he needed to go through.
• This moves Spain a step closer to holding its fourth general election in as many years.

• Malaysia on July 25, 2019 restarted a $10-billion, China-backed rail project that is part of Beijing’s global infrastructure drive following its suspension last year when a corruption-plagued government was ejected from power.
• The 640-kilometre line will link northeast Malaysia, near the Thai border, to the country’s main port on the busy Strait of Malacca in the west, forming part of a network it is hoped will eventually run from southern China right through Southeast Asia.
• At a ceremony in the northeastern state of Terengganu, Malaysian Transport Minister Anthony Loke said the line would improve “public transport systems in rural areas, especially in the east coast of peninsular Malaysia”. 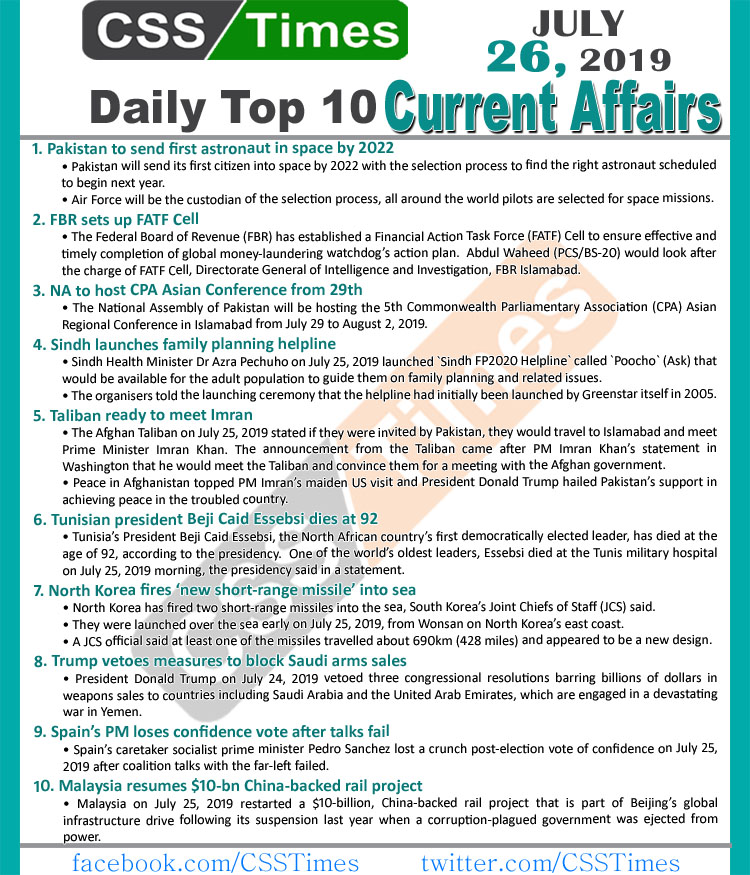