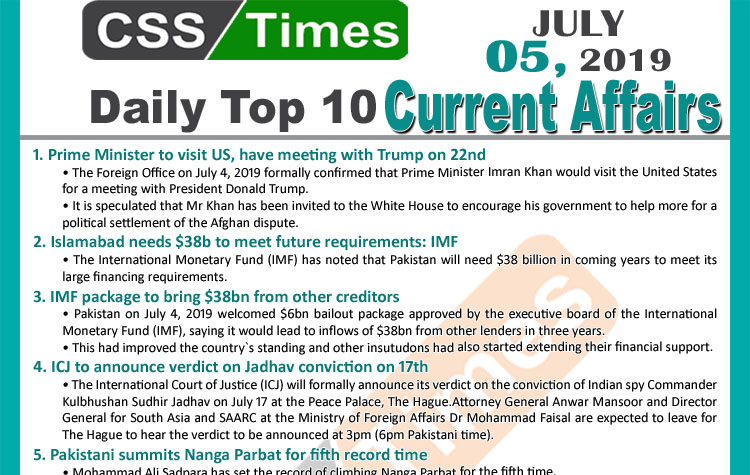 1. Prime Minister to visit US, have meeting with Trump on 22nd

• The Foreign Office on July 4, 2019 formally confirmed that Prime Minister Imran Khan would visit the United States for a meeting with President Donald Trump.
• `At the invitation of US President Donald Trump, Prime Minister Imran Khan will visit Washington and hold a meeting with him on July 22,` FO spokesman Dr Mohammad Faisal said at the weekly media briefing.
• This was the first official confirmation of the prime minister`s upcoming visit to the US after the reports that Mr Khan`s meeting with Mr Trump has been scheduled made the rounds in media for days.
• It is speculated that Mr Khan has been invited to the White House to encourage his government to help more for a political settlement of the Afghan dispute.
• The Trump administration looks eager to have a deal in Afghanistan and believes Pakistan will play a major role in attaining it.

• The International Monetary Fund (IMF) has noted that Pakistan will need $38 billion in coming years to meet its large financing requirements.
• “The Fund-supported program is expected to coalesce broader support from multilateral and bilateral creditors in excess of US$38 billion, which is crucial for Pakistan to meet its large financing needs in the coming years,” the IMF has stated in its handout released after approving $6 billion 39-Month Extended Fund Facility Arrangement for Pakistan.
• The IMF has projected that Pakistan’s growth rate would remain lower, budget deficit and debt to GDP will further increase in the ongoing fiscal year. The country’s GDP will remain at 2.2 percent during ongoing fiscal year, which will be lower than 3.3 percent growth recorded in previous year.
• Meanwhile, Pakistan’s budget deficit excluding grants will remain at 7.3 percent of the GDP in current fiscal year, which will be higher than the deficit of 7 percent of the GDP projected for previous year. Similarly, debt to GDP will go up to 76.9 percent in 2019-20 as compared to 74.9 percent of year 2018-19.
• Says misaligned economic policies fuelled short-term growth in recent years

3. IMF package to bring $38bn from other creditors

• Pakistan on July 4, 2019 welcomed $6bn bailout package approved by the executive board of the International Monetary Fund (IMF), saying it would lead to inflows of $38bn from other lenders in three years.
• Speaking at a hurriedly called news conference, PM`s Adviser on Finance and Revenue Dr Abdul Hafeez Shaikh said the approval of 39-month reform programme by the IMF executive board without opposition from any member would provide stability to Pakistan. `The board has given us trust to prove ourselves good partners and deliver on reform promises,` he said.
• This had improved the country`s standing and other insutudons had also started extending their financial support.
• Asian Development Bank would disburse about $2.1bn out of $3.4bn agreed funds to Pakistan this year and the World Bank had also agreed to additional assistance purely for budgetary support.

4. ICJ to announce verdict on Jadhav conviction on 17th

• The International Court of Justice (ICJ) will formally announce its verdict on the conviction of Indian spy Commander Kulbhushan Sudhir Jadhav on July 17 at the Peace Palace, The Hague.Attorney General Anwar Mansoor and Director General for South Asia and SAARC at the Ministry of Foreign Affairs Dr Mohammad Faisal are expected to leave for The Hague to hear the verdict to be announced at 3pm (6pm Pakistani time).
• Harish Salve, representing New Delhi, had opened the arguments on Feb 18, followed by English Queen`s Counsel (QC) Khawar Qureshi who made submissions on Feb 19 on behalf of Islamabad.
• Kulbhushan Jadhav, who was captured in Balochistan in March 2016, had confessed to his association with Indian intelligence agency RAW and his involvement in espionage and fomenting terrorism in Pakistan. On May 18, the ICJ through an interim order stayed Jadhav`s execution after which Pakistan`s Foreign Office communicated to the world court that the government had instructed all relevant departments to give effect to the order.
• Pakistan has already furnished two counter-memorials on the Indian claims.

• Mohammad Ali Sadpara has set the record of climbing Nanga Parbat for the fifth time.
• Confirming the first successful summits of this season, the ACP said that at roughly 2pm, 11 climbers including Stefi Troguet, Sergi Mingote and veteran Pakistani mountaineer Mr Sadpara had reached the summit of the 8,126 metre Killer Mountain, at the tail end of the Himalayas.
• The climbers set off for the final summit push at 1am Thursday morning, climbing 1,000 metres through waist-deep snow.
• Two months ago in May, Mr Sadpara became the first Pakistani to summit the 8,516-metre Lhotse and the 8,485-metre Makalu in Nepal. ACP Secretary Karrar Haidri congratulated Mr Sadpara “especially for the record summit for the fifth time of Nanga Parbat.”

• Kyrgyzstan handed citizenship to the last stateless people on its territory on July 4, 2019 in what UN officials hailed as a breakthrough in the global fight to end the plight of millions of `legal ghosts` who lack any nationality.
• An estimated 10 to 15 million people worldwide are not recognised as nationals by any country, often deprived of education, health, housing and jobs, and at risk of exploitation and detention.
• The UN refugee agency (UNHCR) launched an ambitious campaign called #Ibelong in 2014 to end statelessness in a decade.
• Kyrgyzstan is the first country to meet the deadline.

• Russian President Vladimir Putin disclosed on July 4, 2019 for the first time that a secret military submarine hit by a fatal fire three days ago was nuclear-powered, prompting the defence minister to assure him its reactor had been safely contained.
• Russian officials have faced accusations of trying to cover up the full details of the accident that killed 14 sailors as they were carrying out what the defence ministry called a survey of the sea floor near the Arctic.
• Moscow`s slow release of information about the incident has drawn comparisons with the opaque way the Soviet Union handled the 1986 Chernobyl nuclear power station disaster, and another deadly submarine accident the 2000 sinking of the nuclear-powered Kursk, which claimed 118 lives.

• A 3,000-year-old quanzite head of Egyptian `Boy King` Tutankhamun was auctioned off for $6 million on July 4, 2019 in London despite an outcry from Cairo.
• Christie`s auction house sold the 28.5-centimetre (11-inch) relic for $5,970,000 at one of its most controversial auctions in years. No information about the buyer was disclosed.
• The famous pharaoh`s finely-chiselled face its calm eyes and puffed lips emoting a sense of eternal peace came from the private Resandro Collection of ancient art that Christie`s last auctioned off 2016 for 3 million.
• But angry Egyptian officials wanted July 4, 2019`s sale halted and the treasure returned.

• World fame Sultan Muhammad Khan Golden of Pakistan, a Pakistani motorcar and motorcycle stuntman and jumping specialist July 4, 2019 claimed to have created a new world record of reverse driving his car over a speed of 112 kilometer per hours during his practice preparation for the forthcoming Shandur Polo at Saidu Sharif, Swat by breaking the record of American driver of 58.48 kilometers reverse driving.
• Sultan Muhammad Khan Golden, hailing from Balochistan province, has the credit of introducing the sport of reverse motorcar jumping and set the world record by reverse jumping of 150 feet over 15 cars, has another distinction of created the most speed reserve driving record of 112 kilometers per hour record.
• The most fame Pakistani stuntman and jumping specialists had setup the world record of jumping over 22 cars covering 249 feet distance in way back 1987, by leaving behind USA’s jumper record for jumping 246 feet over cars.

• West Indies produced a defiant display to beat bottom side Afghanistan by 23 runs in the World Cup at Headingley.
• Having lost five successive matches, the Windies were only one place above the winless Afghans but Shai Hope, dropped on five, made an assured 77. Skipper Jason Holder blazed four huge sixes to take their total to 311-6. Afghanistan were all out off the final ball for 288, 18-year-old wicketkeeper Ikram Alikhil scoring 86 in their highest score batting second in ODIs.
• Afghanistan finish their campaign without a victory. 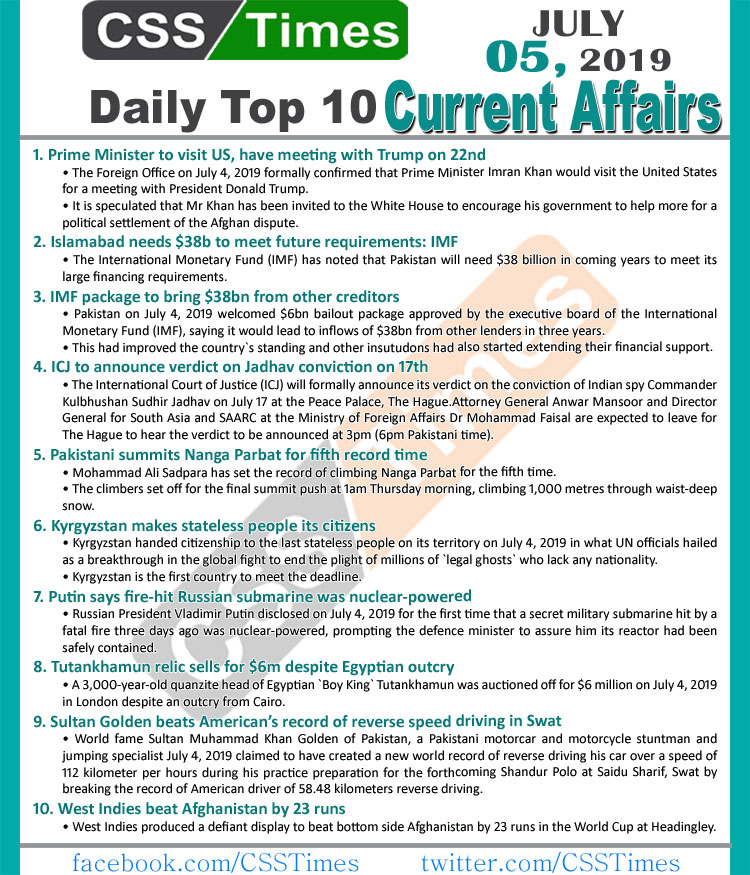