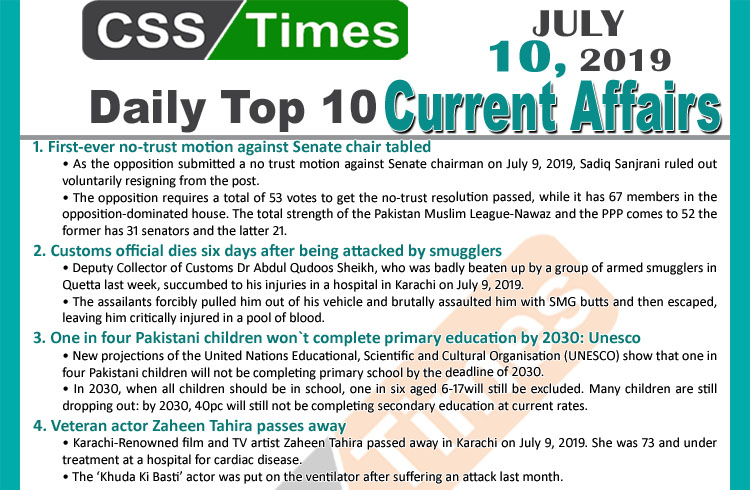 • As the opposition submitted a no trust motion against Senate chairman on July 9, 2019, Sadiq Sanjrani ruled out voluntarily resigning from the post.
• The opposition requires a total of 53 votes to get the no-trust resolution passed, while it has 67 members in the opposition-dominated house. The total strength of the Pakistan Muslim League-Nawaz and the PPP comes to 52 the former has 31 senators and the latter 21.
• The no-confidence motion was submitted to the Senate secretariat by Leader of the Opposition in the Senate, Raja Zafarul Haq, PPP parliamentary leader Sherry Rehman, PML-N leader Javed Abbasi and Jamiat Ulema-i-Islam`s (JUI-F) Maulana Abdul Ghafoor Haideri after a meeting of the opposition senators.

2. Customs official dies six days after being attacked by smugglers

• Deputy Collector of Customs Dr Abdul Qudoos Sheikh, who was badly beaten up by a group of armed smugglers in Quetta last week, succumbed to his injuries in a hospital in Karachi on July 9, 2019.
• On July 3, masked armed men had attacked Dr Sheikh when was returning to Quetta after seizing a container load of smuggled high-value goods in an operation in the Kolpur area.
• As the staff was busy in completing the legal formalities, Dr Sheikh was forcibly stopped near Gahi Khan Chowk by two vehicles of armed men who rammed their jeeps into his official car.
• The assailants forcibly pulled him out of his vehicle and brutally assaulted him with SMG butts and then escaped, leaving him critically injured in a pool of blood.

• New projections of the United Nations Educational, Scientific and Cultural Organisation (UNESCO) show that one in four Pakistani children will not be completing primary school by the deadline of 2030.
• The country will only be halfway to the target of 12 years of education for all, with 50 per cent of youths still not completing upper secondary education at the current rates, UNESCO says.
• Almost a third of the way to the 2030 deadline for the Sustainable Development Goals (SDGs), the new UNESCO projections prepared for the UN High-level Political Forum opening in New York on Tuesday show that the world will fail its education commitments without a rapid acceleration of progress.
• In 2030, when all children should be in school, one in six aged 6-17will still be excluded. Many children are still dropping out: by 2030, 40pc will still not be completing secondary education at current rates.

• Karachi-Renowned film and TV artist Zaheen Tahira passed away in Karachi on July 9, 2019. She was 73 and under treatment at a hospital for cardiac disease.
• The ‘Khuda Ki Basti’ actor was put on the ventilator after suffering an attack last month.
• The actor was in hospital for the previous two weeks, according to family sources.
• Zaheen Tahira was one of Pakistan’s most beloved actresses, who joined the entertainment industry in the mid-60s.
• She also produced and directed a few television series. She played the lead role in Pakistan’s record breaking serial Khuda Ki Basti by Shaukat Siddiqui.

• Taliban represent atives and in fluential Afghans claimed on July 9, 2019 to have reached a landmark roadmap for peace, which commits the militants to avoid attacking civilians and civilian institutions.
• Also on July 9, 2019, US special envoy Zalmay Khalilzad left Doha for Beijing and Washington for consultations after another `positive` round of talks with Taliban representatives.
• Taliban representatives held a two-day peace conference with a group of influential Afghans at Doha, Qatar, on July 7 and 8. They released a declaration on July 9, 2019 carrying details of a roadmap that they hope could hasten the end of the 18-year war.
• The declaration includes a clear pledge by the Taliban to reduce violence against `civilians, public health institutions, schools, universities, hospitals and homes`. This pledge is seen as a `security assurance` before a final deal for the withdrawal of all foreign troops from Afghanistan.

• H. ROSS Perot, the feisty Texas technology billionaire who rattled US politics with two independent presidential campaigns in the 1990s that struck a chord with disgruntled voters, died on July 9, 2019 at the age of 89.
• `Ross Perot, the ground-breaking businessman and loving husband, brother, father and grandfather, passed away early July 9, 2019 at his home in Dallas, surrounded by his devoted family,` the Perot family said in a statement.
• A family spokesman said leukemia was the cause of death.
• Perot`s fortune was estimated at $4.1 billion by Forbes magazine in April 2019.

• Israel Prime Minister Benjamin Netanyahu is planning to travel to India in September just days before he faces elections.
• Mr Netanyahu was due to visit Delhi in February this year, also just ahead of the earlier Israeli election, which failed to give his coalition a clear majority. He will now make a `short visit` to meet Prime Minister Narendra Modi possibly on Sept 9, which Israeli media described as a photo-op to boost his electoral profile.
• Israel-India defence ties were in action during the February standoff with Pakistan following the Pulwama massacre.
• Mr Modi became the first Indian Prime Minister to visit Israel in 2017, a visit Mr Netanyahu returned in January 2018, which marked 25 years since the establishment of full diplomatic relations.Despite winning in April, Mr Netanyahu was unable to build a coalition in the 120-member Knesset (Israeli Parliament) and was forced to declare fresh elections, which will now be held on Sept 17.

• The US special envoy for peace in Afghanistan wound up on July 9, 2019 the seventh round of talks he has held with the Taliban in Qatar, after signs of progress in efforts to end the longest war the United States has ever fought.
• The US envoy, Zalmay Khalilzad, met Taliban officials briefly a day after a delegation of Afghan citizens and the militants agreed on a “roadmap for peace”, in particular a joint call to end civilian casualties in the 18-year war.
• “Khalilzad will now brief his bosses and they will make an announcement. The seventh round has ended,” said a senior official privy to the talks.
• The United States and the Taliban are getting closer to a deal that is expected to be centred on a US promise to withdraw troops in exchange for a Taliban promise not to let Afghanistan be used as a base for terrorism, officials say.

9. China angers as US approves $2.2b Taiwan arms sale

• The US State Department has approved a potential arms sale to Taiwan, estimated to be worth $2.2bn (£1.76bn), the Pentagon said.
• Last month, China’s Foreign Ministry had urged the US to halt the sale, calling it an “extremely sensitive and damaging” decision.
• The deal is for 108 Abrams tanks, 250 Stinger missiles and related equipment.
• China regards Taiwan as part of its territory which should be reunited with the mainland, by force if necessary.
• Chinese foreign ministry spokesman Geng Shuang also called for the US to abide by the One China policy – under which the US recognises and has only formal ties with China and not Taiwan.

• A former UN official has been jailed for sexually abusing children in Nepal, officials said on July 9, 2019, following a trial underscoring the country`s growing appeal for foreign paedophiles.
• Peter John Dalglish, 62, from Canada, a former high-profile humanitarian worker, was sentenced to terms of nine and seven years in two cases after being convicted last month.
• Dalglish was arrested in April last year in Kavrepalanchowk district, near Kathmandu, by Nepal`s Central Bureau of Investigation. The two boys were at the house where police detained Dalglish, investigators said.
• Dalglish denied the charges, and his lawyer could not be reached for comment. 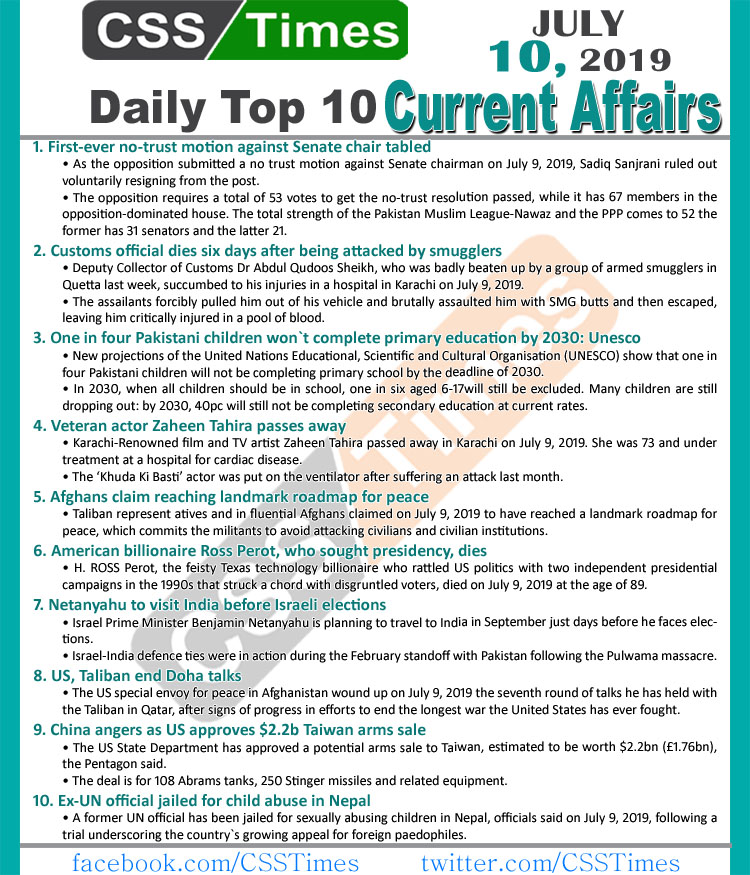